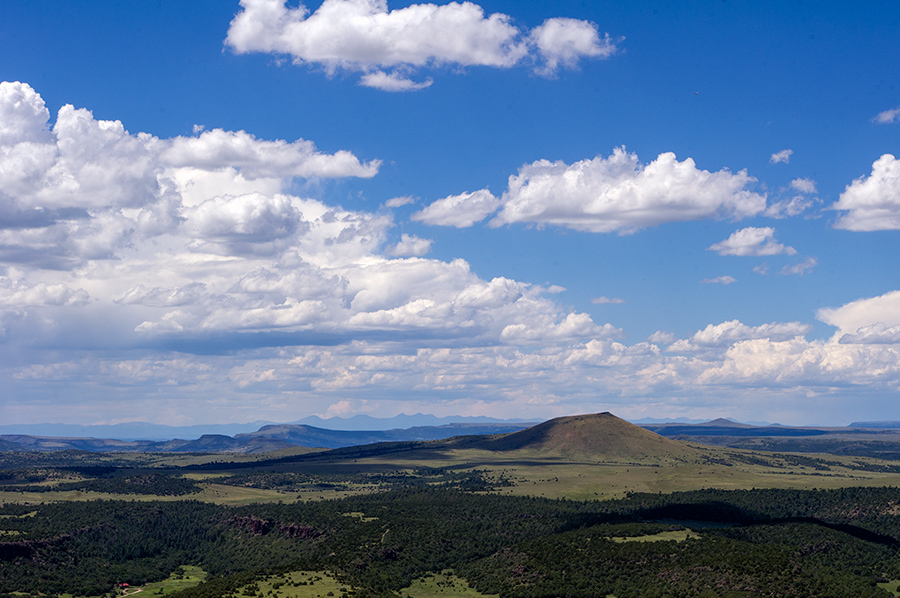 Would you believe we visited a volcano on my birthday on the exact day that the volcano was having a birthday? Not the mysterious one in the photo, which I haven’t looked up yet—New Mexico is full of them—but I took the shot from the summit of Capulin Volcano, which I do know and where I was before a long, long time ago. The northeastern part of the state being what it is, I was looking forward to the solitude. When we drove into the visitors’ center at Capulin Volcano National Monument, however, the place was full of people having a party. There must have been a dozen rangers and thirty or forty people. The parking lot was almost full.

Unbeknownst to me and entirely by accident, we’d arrived not only on the same day but also the exact hour of the monument’s Centennial celebration! On August 9, 1916, President Woodrow Wilson established Capulin as a national monument, and the National Park Service was doing the anniversary up right.There were tents set up outside and chairs arranged in front of a podium. People were walking out of the visitors’ center carrying plates of goodies and drinks. There’s nothing I like better than free food, so I hurried inside, where a nice lady park ranger who looked my age offered me a slice of “volcano birthday cake.” (A variety of red velvet cake, we think.)

“Yes, but we’re older,” she said, meaning the national monument.

“Sorry the top is gone,” she said. “A little while ago, it looked more like a volcano.”

The cake was magnificent, though. The icing must have been half an inch thick. As I headed out to where my wife was waiting, the lady ranger tried to get me to go sit under the tent instead:

“Woodrow Wilson is about to speak!” she said, and it was true.

A gentleman in appropriate costume wearing a period straw hat was about to read the original proclamation establishing the national monument. Who knew there were Woodrow Wilson impersonators? At any rate, I declined and went to have lunch with my wife at a nice long picnic table in the shade. One cool irony is that because we knew we’d be traveling on my birthday, I’d tried to pack a couple of slices of store-bought carrot cake to celebrate. As it turned out, we lacked a decent way to carry them without rubbing the icing off and left them home, but the universe provided birthday cake regardless. Just the sort of thing that Leos relish on their birthdays, being treated like a king by God. The whole trip was remarkable.

I’d decided to head for Capulin Volcano on my birthday because my family had visited the place fifty-six years ago on a month-long camping vacation that took us all the way to Yellowstone, where we arrived just three days after a terrible earthquake that killed dozens of people. I don’t remember much about Capulin back then, it being the first overnight stop on the road from Abilene, Texas, in our 1954 Ford station wagon pulling a large camping trailer badly, but this was the trip where my mother chased a bear away from our Yellowstone campsite with a broom, and the black ’54 Ford Country Sedan overheated on a hill in heavy traffic entering the park, enraging my father so much that he slammed the driver’s door and broke the window glass. Fun times in America!

We kids were afraid of the old man when he was crazy mad and with good reason. The trip up had been one long tale of, “Do I have to stop this car and spank someone?”, this shouted over wind noise as he turned halfway around in the driver’s seat while car and trailer swerved across the road. (My mother would try to calm him down, and then they’d have a fight.) Once my little sister Mary caught hell for tossing baby bottles out of the window—probably glass instead of plastic in those days. No air conditioning either, but we did have a weird evaporative cooler that clamped onto a partly opened window and never worked. Dad was almost as proud of that thing as he was of the prospector’s canvas waterbag that hung from the hood ornament. The idea was that the bag would keep the water cool by evaporation. He tested this out whenever we stopped, but I don’t recall that it was much of a success. Maybe with a burro instead of the hot black Ford?

Despite the serendipity of the volcano party on my birthday, I did lapse into something of a rocky mood as we drove up to the summit. Perhaps it was some psychic bleed-through from the past. We mostly never stop to think about whether or how long our emotions might reverberate into the future, but sometimes they do. Take care in your daily lives and try to spread some joy. If you drop dead this instant, how will folks remember you? I think about this all the time. It helps to keep me in the moment and a tiny bit more sane.