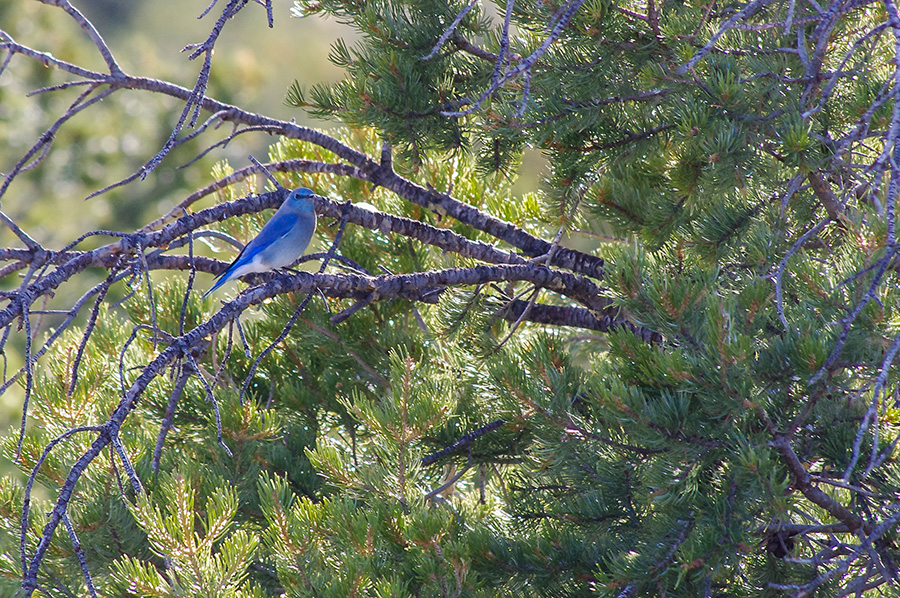 Sometimes when I don’t have a fresh photo to post with a story, I’ll check the archives for something nifty on the same date a few years back. This one is five years old almost exactly, off by just three days! Yes, we have western and mountain bluebirds all year round in northern New Mexico (robins, too), but in the warmer months, you’ll mostly find them high up in the mountains. That this is totally opposite from what one finds in the East should come as no surprise.

It has been a very different fall this year. We’ve been taking weekly roundtrips to Alamosa, Colorado, ninety miles each way, most of that on nearly empty two-lane roads across the kind of landscape where you wouldn’t be surprised to see a flying saucer. At least I wouldn’t. Almost every time, the weather’s been spectacular, although we’ve been driving back at night since switching to Mountain Standard Time. In that respect, we’ve been uncommonly lucky and only had to bail out once because of snow. Each trip is an adventure. This last time I had to come to a stop in the middle of US 285 at San Antonio Mountain to wait for a herd of several dozen pronghorns (“antelope”) to finish jumping over fences and move on out into the vastness. Such beautiful animals, especially so close in the bright midday sun.

This is quite an undertaking on a weekly basis. The car has to be in perfect shape. I’m pretty good at that and also keep it clean and handsome. I enjoy the driving and the concentration, too. The scenery is remarkable: the impossibly deep gorge, the scary snow that caps the mountain ranges, the stupefying vistas with almost no one else around. It’s so intense and lazy dangerous. By that I mean it isn’t hard to get there, but that doesn’t mean it’s normal, and you’d better pay attention! I thought about that the other night, hurtling through the inky blackness some forty miles from nowhere. It was fourteen degrees outside. You want everything to keep on humming, all the little dials happy, heater working, tires good, at least until you see the lights of Taos in the valley far away, and hopefully beyond.

I don’t know why I write about such things. I’ve said it all before. It may have something to do with being present—that would be notable for me. After all, what could be more important than feeling good right now? This is a huge responsibility. I tried it recently and it only hurt a little bit. God bless and carry on.