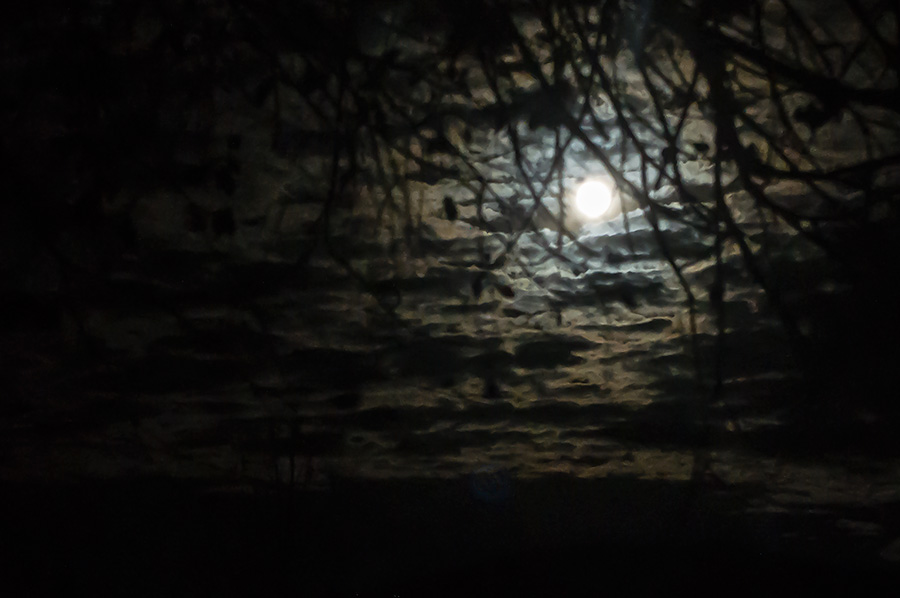 A fine murky holiday season to you all!

Well, I tried to finish, I really did. For two days after taking this picture of the full moon on Wednesday night, I worked on a blog post on the general theme of Thanksgiving (dinners, get-togethers, etc.), believe it or not. The truth is, however, that well before I got out of high school, my mother had become too psycho to do anything but buy fast food! At least that’s how I remember it. (There may have been a resurgence of traditional Thanksgiving dinners after I left home. Doubtful, although we’d have to ask my surviving younger siblings.) I wonder how my father felt about this? Then again, with the exception of a few times when his fear or grief broke through, I wonder how he ever felt about anything at all, other than being mostly angry at the world and wondering where the rest of us had come from.

The holiday killing ground theme intruded into real-time yesterday. In the process of trying to untangle the threads, my wife helpfully inquired about specific family Thanksgivings, which led me somehow to recall the time my mother threw an entire drawer of silverware at me and chased me into my room, returning a moment later to fling an empty suitcase at my feet and scream at me to “Get out!” As I was a junior in high school at the time, there wasn’t much I could do but walk the streets of our neighborhood in Massapequa until well after dark. Where was the old man during all of this? The age-old question, you might say.

Sinking fast, that led me to remember how the family moved from New York to Texas on the very day I graduated from high school, as in thirty minutes after. My parents hadn’t wanted to wait that long at all, as I recall, only relenting several days before so that I could attend the ceremony. They may or may not have been there themselves, what with last-minute packing to attend to. So much for savoring the moment and saying goodbye to my friends.

The rest of that day was a massive fuck-up, as we hurtled off Long Island in two cars. I was driving the old ’58 Volkswagen with my brother Bill, following the rest of the family in the station wagon, but naturally my father drove too fast and we became separated in New Jersey. My brother and I spent the night parked beside the highway somewhere in the Garden State, taking turns to watch for the overloaded Ford that never appeared. This was in the days before cell phones, obviously. Sometime around dawn, I realized that they’d have stopped for the night themselves, and I proceeded south toward Maryland. I didn’t know what their intended destination was, but I did recall some mention of a state park near Hagerstown, so I drove there. No family, of course, but I spied a state police barracks on our way out and had the presence of mind to stop and say tell someone what was going on.

To my great relief, the officer I talked to told me we’d been reported missing and called my father at our grandmother’s house in Chestertown, MD—an obvious choice of destination if the idiots had only told me. (Before we left Massapequa, my only instruction had been to “keep up…”) My brother and I stayed put at the barracks and waited a couple of hours more until my parents showed up. At least the old man cried—the first time I’d ever seen him do so—and I cried yesterday for all their sins.

Previous post: Seven Degrees at the Edge of Town