Thank You Jesus for the Nails 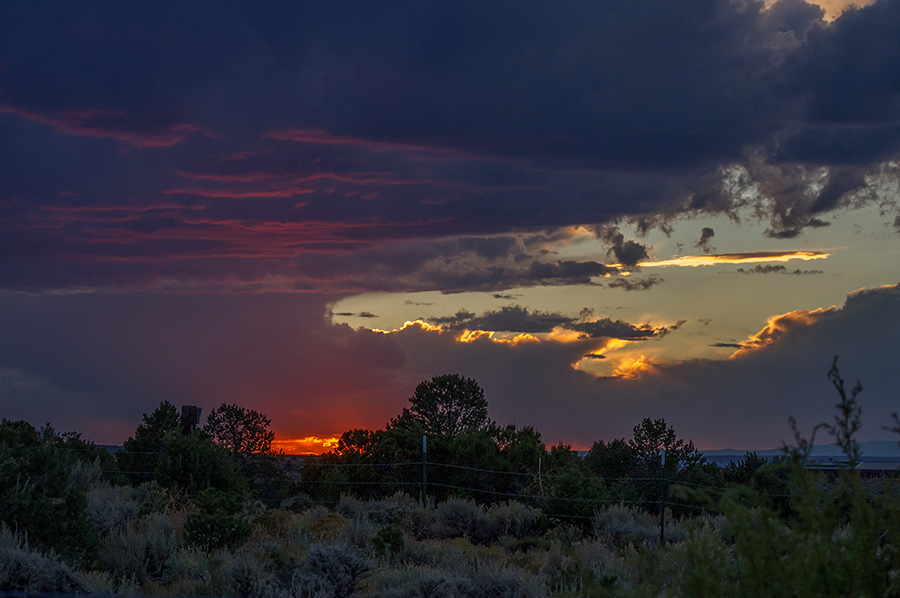 Yet another sunset! Compensatory charm, you might say. I posted this image to Twitter early Friday evening: “From a wretched little dirt road on the south end of Ranchos de Taos,” as I recall. This is the only place I’ve ever lived where you can find trailers, dead cars, mudholes, and loose cows on top of a ridge with a ninety-mile view. In Colorado there’d be driveways with squeaky-clean trucks and probably curbs, but this is broke-dick motherfucker wild New Mexico.

I remember when we first moved here, there were always these horror stories in the news. Someone in Deming would kidnap his ex’s kids and cut their heads off driving down the road because they had the devil in them, things like that. It was practically an epidemic. A woman was feeding her son’s three German shepherds while he was away and they ate her. (That one was local.) I looked at a house to rent in Arroyo Seco that had a rotten deer’s head wired into a tree with old coat hangers next to the front door. I mean, they did it up right. More recently, some poor fellow living in a trailer with his brother tried to kill himself by swallowing prairie dog poison—the stuff that gives off poison gas when it gets wet—that worked, all right, but not before turning his body into a weapon of mass destruction that locked down the the emergency room in Taos for a day and a half.

As I was typing this, there was a knocking at the door. Assuming it was a Jehovah’s Witness, this being Saturday and all, I put on my best get-the-hell-out-of-here face and flung it open, only to find a well-dressed sobbing woman in her thirties who wanted to use the phone. It seems her boyfriend had picked her up in Abiquiu and brought her to the house at the end of the road, where they’d had a fight. He’d taken her purse (and phone) and she’d hit the road on foot to call the cops. I loaned her my cell phone and let her hide in the yard so said boyfriend wouldn’t see her if he came driving by, which happened shortly after. Whoever she called—911? A deputy?—showed up about thirty minutes later, not in an obvious cop car but a big white four-door pickup truck, and the two of them drove off together.

I have no idea whatsoever what any of this means. Great sunset, though. And so it goes.