So Simple Yet So Hard 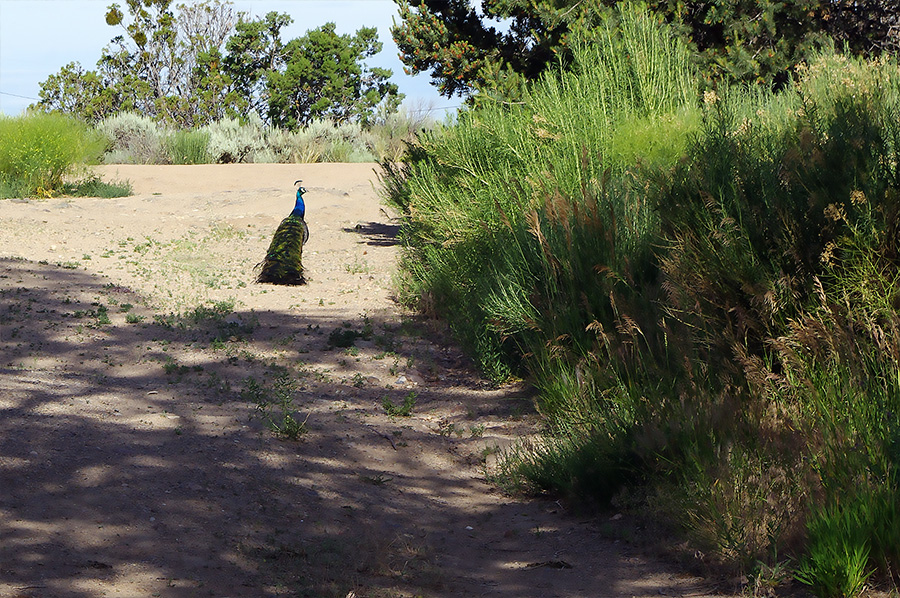 Last night we had dinner with a man who refused anesthesia and simply left his body for a surgical procedure down in Albuquerque. (“He’s from Taos, it’s all right.”) This morning there was a peacock in our driveway eating birdseed.

It should not surprise you that another story from last night involved a barking bear. Our friend was cutting piñon in the wilderness and heard the sound. (Bears do make a noise like that, I’ve heard them, too.) Tracing the barks, he spotted the bear at the edge of a clearing in the forest, whereupon the animal turned and vanished through a tangled wall of trees. The man followed and discovered an old miner’s cabin with a long-abandoned claim nearby. Lying about were chunks of gold and silver ore too poor to haul away on the miner’s last trip out, when gold was close to twenty bucks an ounce. At the time of this find, the recoverable gold in those rocks was worth considerably more—current price, $1,167/oz—leaving our host very grateful to that bear.

The energy of the evening surely carried over to our morning peacock. When first observed, he was ten feet from the front door, about as close as the big black bull had been to the back door just the other day. Some time later, we were still reeling from the peacock sighting when a herd of sheep and goats went running past the top of the driveway, bells a-ringing. A moment later came a man on a horse with several sheep dogs, and twenty seconds after that, the whole procession trotted past the other way!

When we drove into town a short time later, we found the herder standing in the road around the bend a hundred yards away. The sheep and goats were grazing in the uncut grass beside the acequia, the horse was chomping flowers in the ditch, and the dogs were running back and forth the way they do, as proud as hell and fully manifested, all this taking place in what would be the neighbors’ own front yards, if such a thing existed, as bizarre a Fellini circus as I’ve ever seen along the dusty little road that no one owns. What do I want to find, the question is, and why have I not thought it?