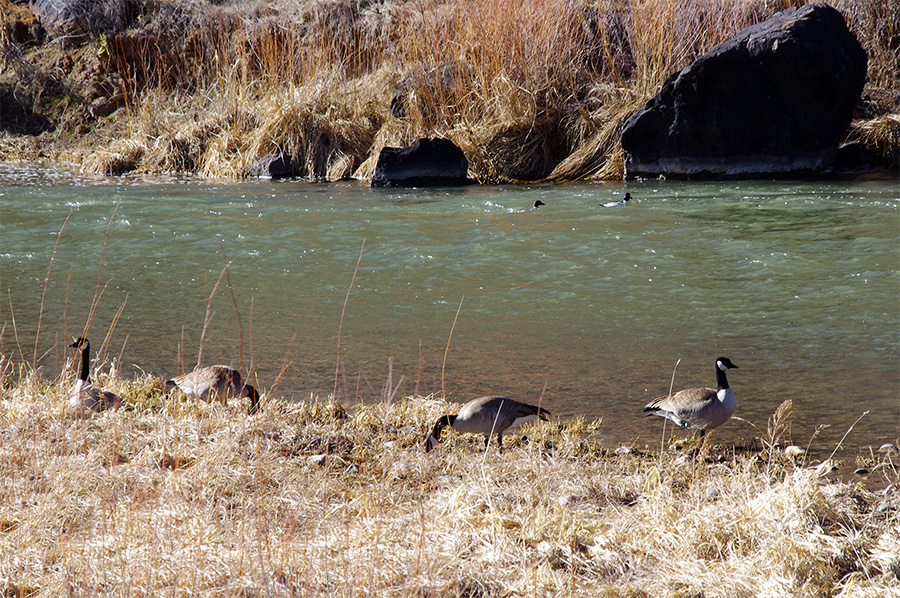 You’re looking at Canada geese and what may be a pair of goldeneyes moving upstream in the background. It’s such a kick to see these here. What you can’t see is how high the cliffs are above this scene. Think eight hundred feet plus and you’ll be close.

The gorge is even deeper farther north; this 2010 article about the largest freshwater spring in New Mexico may open your eyes a bit. (“…could fill a large tanker truck in ninety seconds,” etc.) It’s a similar but somewhat different environment than shown above, deeper and more isolated. Three million year-old lava tubes are “common features in the canyon walls,” according to authors Paul W. Bauer and Peggy S. Johnson.

Lava tubes, man. Freakin’ lava tubes a thousand (?) feet long. Water collects in there, the river cuts across the tubes, boom you get artesian springs. Notice that we get agua in the desert now because of one enormous lava eruption three million years ago. Considering the depth of the canyon, imagine how thick the molten rock was! Holy god, man. Right here, in this place. That’s a lot of burning hell.