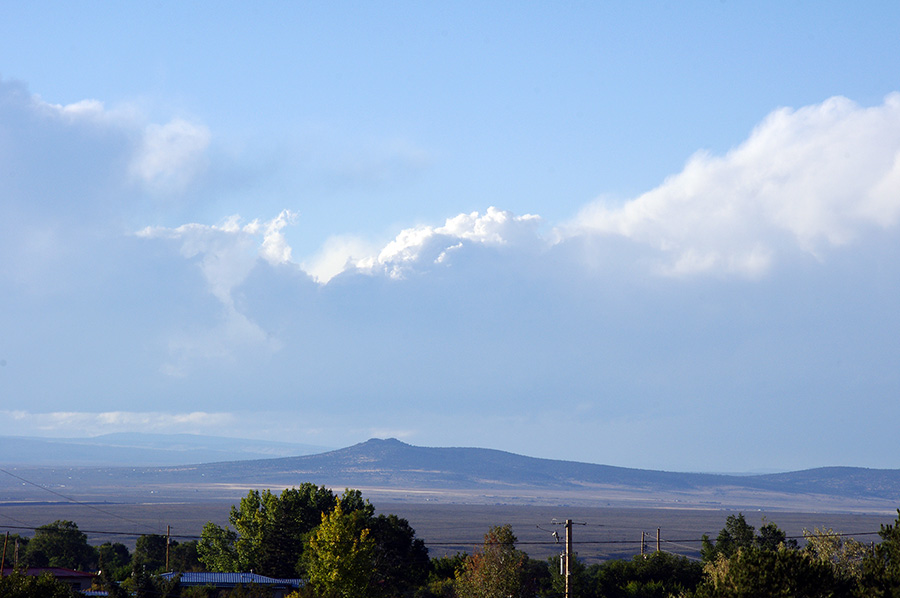 Windy, cold air blowing in from Colorado, early sunset on the way

Must be time to get the mail. Something to do away from the computer. No, I will not step into the stupid filthy plastic shoes that never wear out. Not this time. Why haven’t I thrown them away? (We know.) The better ones I have to tug and pull at to get the elastic over my heel, but they hold more dignity. The sole supports a man. Up the rocky driveway into the sun, hand shielding my eyes. There it is again, the ninety-mile view, even from the community mailbox listing ten degrees to port. It leans at least that much from when someone hit it with a truck, but the Ranchos Post Office let it be. You bent it, you keep it—except I wasn’t there.

Not much in the box. My dead mother still gets junk mail, though. It’s been two and a half years. No, she will not “come back” to Consumer Reports or enter your sweepstakes. We are so far past that.

Speaking of Arizona, two days ago I mailed some money to the one they left behind, something I’ve been holding for him so he doesn’t smoke it, shoot it up, or have it taken by whoever owns the phone he used to call me. Just wanted some, not much, not nearly the whole thing. I could tell he wasn’t alone and probably in trouble. I asked what happened with the biopsy last month, since he never told me. Turns out he still doesn’t know yet, or maybe this is something else. I can’t keep track, he doesn’t fill in blanks, but I can feel the fear. He thinks the V.A. doc will tell him next week he has cancer in his lungs. The two of us watched the old man die that way and I mean watched…

I don’t have to make up stories. Look at where I am. Look at who I am! And all those years I fought it. I know why this exists. I understand.

The other night it got to me, however. Everything, the way that does. “I don’t know what to do,” I said, locked in total tension. And yet, there was no crisis. Nothing real or physical, just things like the prospect of the winter as I built the second fire of the season. The thought of hanging wet clothes on a rack beside the stove another umpteen billion years. Brittle as a stick. Dark as early night.

“The only thing that counts is being happy,” she said. “Being happy now.”

What a perfect partner, and I told her so. Still no answers, but the questions stopped. She put on new pajamas and pranced around to try on clothes for Sunday. Her bare feet hardly touched the floor. I gazed up from my chair and saw the color on her neck and face and arms that looked so perfect with the blue. (She always covers up outside, but here that’s not enough.) New Mexico has done you well, I thought, but kept it to myself.

I ain’t as stupid as I look.