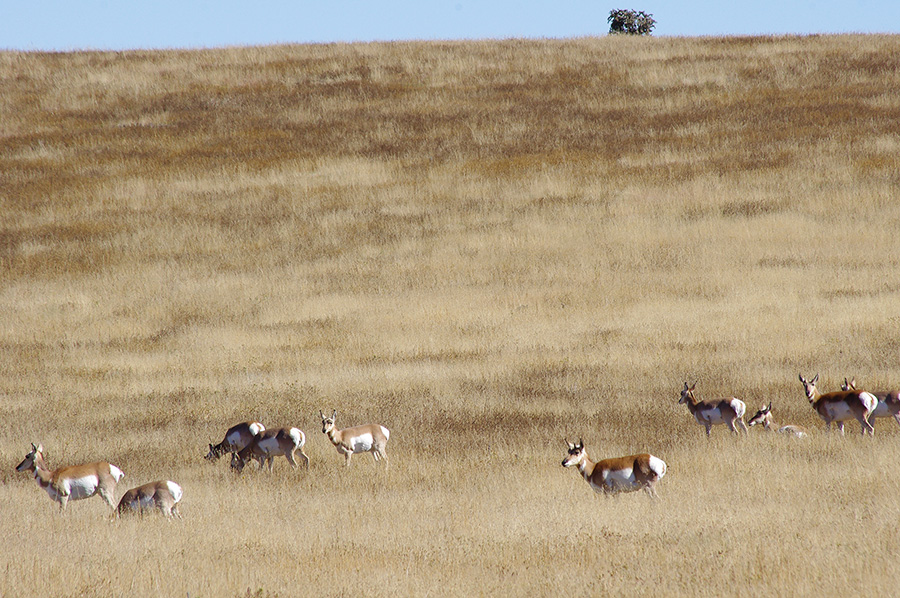 Most Americans call these antelope. I know we do. That’s not what they are, though, and it would be more accurate to call them “pronghorns.” Although Antilocapra americana evolved under the same conditions as Old World antelope and (except for their horns) are physiologically very similar, the animals are unique. According to Wikipedia:

[The pronghorn] is the only surviving member of the family Antilocapridae. During the Pleistocene period, 12 antilocaprid species existed in North America. About five existed when humans entered North America, but all except A. americana are now extinct.

It’s always a joy to see them. I think one reason is that they’re symbols of the West. “Where the deer and the antelope play,” etc. You’ll only find them in high desert or grasslands—open country, undeveloped land, any place one might graze cattle. Not in the mountains, not in the trees. I know a couple who went up to Washington State once from Taos to check out places to live. They didn’t like it, though, and said it rained a lot. But on their return trip, they saw some “antelope” in southern Colorado and felt like they were almost home. There’s something reassuring about the beasts, all right.

We spotted this bunch and quite a few others on the road from Cimarron to Rayado, NM. That particular stretch of highway follows the path of the original Santa Fe Trail established in 1821. My God, the history! I get chills just thinking of it. Kit Carson had a ranch nearby, too. Rayado is a ghost town now, in tip-top shape however, thanks to the Boy Scouts of America and the Philmont Scout Ranch. I need to go back soon and visit the Kit Carson Museum and the reconstructed Santa Fe Trail stage stop. One afternoon just doesn’t cut it where the mountains meet the plains.