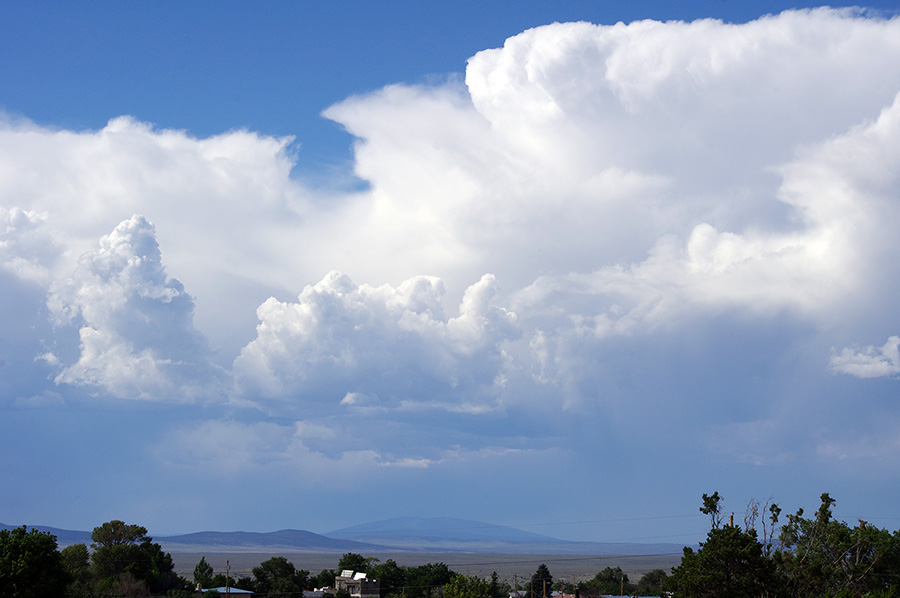 In fifteen minutes they were gone!

What a fine day today! The monsoon storms did a slow dance all around and left us high and dry. Not that that’s a good thing, but at least we’re spared the noise of extra growing things and lambs a-frolicking in the dew.

In a similar vein, we noticed yesterday evening the extraordinary presence of silence in the neighborhood. For at least six weeks now there have been several hours of thumping bass, shrieking kids, and barking adult male voices starting at about four p.m. at the single-wide at the top of the hill. I have no idea why. Last night there was nothing. “Perhaps they’ve all asphyxiated themselves,” I speculated. It was that quiet, like after a poison gas attack. As if I know.

There’s a man’s voice in the mix that I’ve heard for at least ten years in this location in every season. I call him “the shouter.” Even in the dead of winter, mind you, when I’m outside chopping wood, I hear the shouts. They sound like vocalizing without words. In my mind’s eye, I see some poor person chained in a garage who’s either hungry or his shackles are too tight. I even wrote about him once in a column for a now-defunct alternative newspaper we had going here. I say “had” because eventually the publisher sold it to a woman who’d showed up to start a new life. She tried to make it a business-friendly publication, which didn’t work of course, and all the writers quit because we had to plug these things inside our pieces, after which she either died or killed herself. Taos is a hard teacher—and here you thought it was just a dusty ski resort with artsy-fartsy aspirations.

The funny thing was, a few readers wrote in to complain about the essay. I’d used the same description, you see, and one woman in particular thought I should have searched to find out who he was and how to help the fellow. Helping him wasn’t what I had in mind, of course! I think this was the same person who’d castigated me several years before when I wrote about walking to the post office in San Cristobal and how I had to use a stick to fend off devil dogs. (More of a peacemaker, she, and probably scarred about the ankles.) As I wrote about it at the time:

I took to carrying a long stout stick on subsequent walks and learned a few more things about the evil pointy-faced one: the first time I placed the pole across her throat to push her away from my leg, I had the distinct impression that she liked it. A stroke is a stroke, after all. The second time I had the pleasure, I caught her in mid-bark and was rewarded with a satisfying strangled gargle that made my day. The third time she met my stick she tried to eat it, and that’s the way it’s been ever since.

You can read about those days in BUFFALO LIGHTS, which someone ought to buy and make into a film. I could use some nice new days myself, as nothing seems to have changed that much except some restaurants failed and stuff is more expensive. Rumble-rumble (you didn’t hear that from me), and onward through the fog.