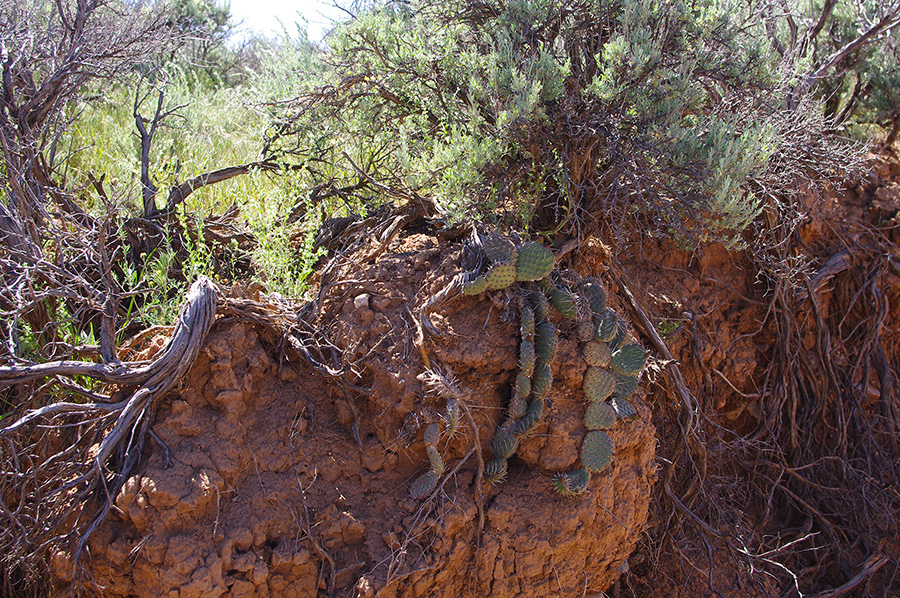 Cactus hanging into the arroyo

“Let’s move!” she said, upon hearing yesterday that the newly elected three member majority of the Taos town council had voted to rename Kit Carson Park something else to “right past wrongs.” My sentiments exactly. It was the sudden almost vengeful nature of the thing. It also made no sense, especially without public discussion and some kind of vote. She’s calmed down since then, but I’m still mad and trying to understand why.

“He was atrocious, an Indian killer,” said a member of the council. I realize many people feel that way, but this summary judgment is unfair or worse. It attacks the truth of who we are. As former Horse Fly publisher and Taos observer Bill Whaley put it in this response (my emphasis):

Apparently, the town council has just discovered that Kit Carson is considered a “notorious Indian killer,” and justly so by the Navajos or Dine. Carson conducted, under the orders of the federal government’s military governor, General Carleton, a scorched earth policy against the Southwest’s most notorious raiders in the Dine Homeland. During Carson’s scourge of Dine country, he was accompanied not only by the military, and, according to the history books, by his own trusty Ute allies but also by outriders from Taos Pueblo. Eh?

Indeed, the Dine were unpopular. They frequently raided the Spanish farms and Pueblo tribes up and down the Rio Grande. People theft, especially of children, i.e. slavery, was common among the tribes, the Spanish and Los Americanos. But the times changed and the historic forces, Indian Tribes, Spanish and American soldiers, who hadn’t been able to defeat the Dine in hundreds of years, finally found a vicious general in Carleton, New Mexico’s military governor, who persuaded the wily tracker, Kit Carson, to go out into the wilderness. Call it blowback. Carelton wanted to become as famous as John C. Fremont, the pathfinder, who benefitted from the famous tracker’s uncanny ability to find his way through the untracked Western America.

Carson himself defended the Indians as a whole during the times, attributing their plight to the “aggressiveness of the whites.” He was highly critical of Colonel John Chivington’s horrid Sand Creek Massacre in 1864. He fought for the Utes in order to preserve their reservation homeland. In a Homeric sense, the American Indians and Kit Carson recognized each other as worthy opponents, as members of the warrior culture. Carson’s first two wives were Arapaho and Cheyenne, his daughter by Singing Grass (Arapaho), who died, was raised by his sisters in Missouri. He [later] married a local Taos girl, Josefa Jaramillo.

Taos has a dark and bloody history. Carson’s wife Josefa famously escaped during the Taos Revolt of 1847 by hacking her way through an adobe wall while the rebels shot territorial governor Charles Bent full of arrows and scalped him in front of his family. Other officials met similar fates. One was skinned alive and eaten by hogs in Taos Plaza. Read that line again.
When the army was called in to put down the insurrection, the rebels and their families took refuge in the adobe church at Taos Pueblo, only to be slaughtered en masse by artillery bombardment! You can still go see the ruins. This stuff is everywhere. It’s us. It’s Taos. Hampton Sides’ book Blood and Thunder, not an easy read, is indispensable for understanding the passions of the times and certainly Kit Carson.

Denying the dark side of our common heritage gives us cover to kill again, one way or the other. You can push it down, paper it over, give it another name, then you will act it out. This is full-bore guaranteed.

According to Sides, the thousand men under Carson’s command included “U.S. Army officers, New Mexico volunteers, auxiliaries from a number of Pueblo tribes, and scouts recruited from the Utes.” (As noted above, Taos Pueblo also provided scouts.) The Navajo were archenemies of the Utes and Pueblo tribes, both of whom “regarded the Navajo as an age-old nemesis” and helped to burn and starve them out. Blaming one man buries the complicity of New Mexico citizens and Native warriors in rounding up the Navajo…

History’s a bitch. And so it goes.

UPDATE: Must-read follow-up by Bill Whaley: “Taos Pendejos Hurl Dust in Hispanic Eyes.” Yes, Taos Pueblo (among others) wanted the government to rid them of the Navajo. Carson also refused three times to lead the expedition until threatened with court-martial! If anyone wants to hold a different version in his head, that’s fine, but leave the rest alone.

[Comments closed. A good outlet might be the ole town council, though.]