One Year Ago Today 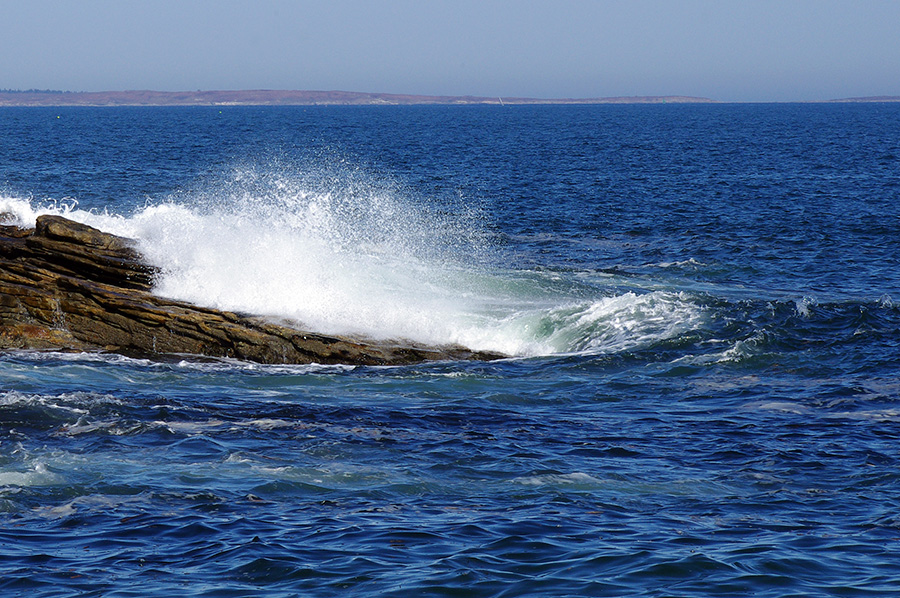 Three days past one full year ago, to be exact, I was standing in the ocean on a beach in Maine. I have a photo of my foot in a few inches of water from a receding wave to prove it, but I just looked and there is nothing to be gained so never mind. The ocean, on the other hand, is overwhelming. How any human being from planet Earth could do anything but worship and protect what you see here is incomprehensible to me.

We used to live in Maryland, but even there we hardly ever got down to the actual sea because I didn’t like the crowds. Once we visited a lonely winter beach in Delaware and that was cool. The long lost weekend with a bunch of friends and someone’s in-laws down at Hatteras was even better, and I have to write that story down before I die. But none of that was on my mind when I was touching the Atlantic. I was completely there. Only later did I figure, what with life and jobs and being busy and then moving to New Mexico, ye gods, it could easily have been twenty years since I last smelled salt water and felt the waves go whoomph against the sand.

It’s good to know those things, just like it’s good to know the desert sky and watch the clouds go drag across the peaks. Water of the living Earth! I was so excited, I wanted to bring a little of the ocean back for my wife to sniff, and I filled a jar I’d brought along for just that very purpose. Back at my aunt’s place however, I tried and couldn’t smell a thing. Meanwhile, I was flying home the next day and didn’t want to be arrested. Mystery liquid in your carry-on, they blow your brains out. So I poured it down the drain.

It was about an hour from my late aunt’s house in the wooded hills outside Augusta to where I took that shot. I was there to sort out her possessions, which I’d inherited, everything except the house. The property was extensive (over 30 acres), an astounding value compared to housing in el Norte, and I considered buying it. No doubt the trustees would have given me a deal. After so many quasi-rooted years in Taos, the house exuded welcome and I felt relief I can’t describe. All that plugging us into that required was an instantaneous, total shift undoing everything we’d known up to that point. One can do these things. That, and moving to the whitest state I know. I’m white, so I can say that. They also still smoke cigarettes* there—in public!—and elected a “human bowling jacket” for governor. It just did not compute. Too strange, too far away from where I was inside my head to ever go back that direction. (This boy’s escaped, where does the sun set?)

I packed five boxes up to mail and shipped a rifle that I’d found, a semi-automatic carbine that holds seven rounds. Most of what was in the house I set up to be auctioned or donated to the local Grange Hall in Vassalboro. My haul included things like fish knives, a gold watch, forceps, two shot glasses, and a boomerang, but mostly I kept books and photo albums. My grandfather was a prolific and dedicated family historian in his later years, and I have documents that no one would believe. No one will understand them when I’m gone, either, because my surviving siblings just don’t know that much. It’s here and yet it’s all forgotten lore.

That was me a year ago. Most of what I brought back is five feet from where I’m sitting now, stacked behind me on the floor. Bins of photographs, books, the fish knives, Granddad’s straight razors and other keepsakes, covered by a couple of wallaby pelts as old as I am. Sitting on a solid mudfloor smoothed out right on top of solid ground, I should point out, in an old adobe house at 7,000 feet about as far away from oceans and family as one could ever get, and yet they’re here though, aren’t they?

* Shaddup, you! My friend K.G. can light up anytime she wants. [wink]