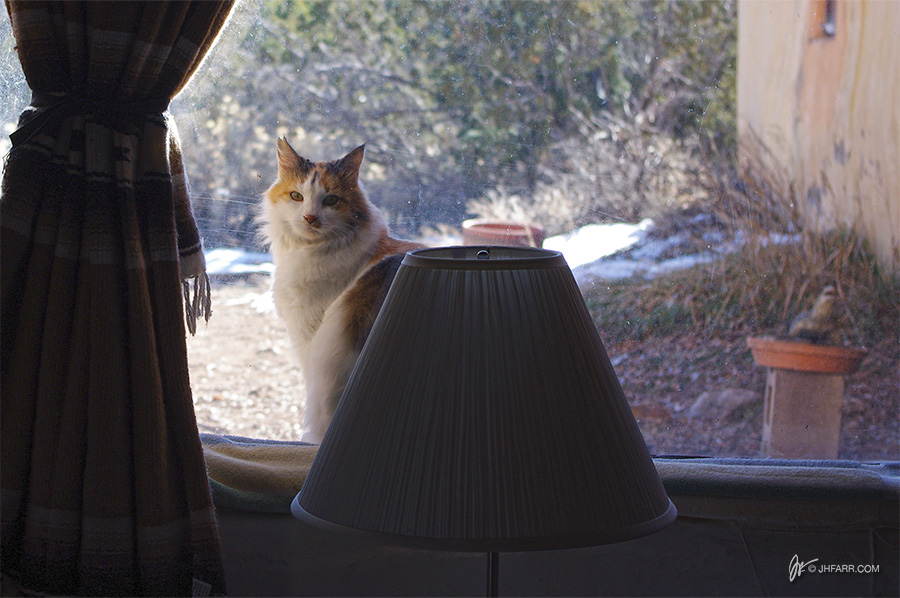 Callie on that deep adobe windowsill

This isn’t about the cat, actually, but the scene fits. (That’s Callie the Wonder Cat, wondering if I’m going to let her in.)

In the photo above, you can see the towel in the windowsill for catching water whenthe ice on the inside of the glass melts in the morning sun. This is an afternoon shot, which means we’ve already dried the towels by the wood stove and put them in place for another night.The Mexican blanket makes a good curtain for the winter. At night we tuck the bottom up inside the sill to hold it in the window frame for a better seal. Like all the windows in the living room, this one consists of a large piece of plate glass mounted in a wooden frame set into the adobe wall.

Sunday morning was very cold. By the time I went out to take my usual four-mile hike just south of town, the temperature had risen to 20 °F. The sky was clear with a stiff wind. There was only one car in the parking lot when I pulled in. The occupants, a fit-looking couple half my age, had just that instant started down the trail in splendid multi-colored athletic gear. By the time I stepped out of my truck, they’d given up and were coming back. I charged off as they were getting into their car—what a great moment, but oh my God the wind. Somehow I was almost fine dressed all in black with cargo pants, long-sleeved T-shirt, and discount store hoodie, but I did have to pull the hood up over my cap. After all, this was the kind of cold that breaks your cheeks.

Within thirty seconds I was out of sight of the parking lot, all alone on the sagebrush mesa. Walking fast, I was exultant in the freezing brightness. Just being out there in that immense open space puts me in touch with a different energy. Sometimes I’m grateful for the distraction, sometimes not, and sometimes… That’s the everyday of it, usually. Sunday, though, was different.

I realize this is hard to understand unless you know more about me than I need to tell, but as I descended the trail, something finally unclenched, and I had the sense that everything would be all right. There was a falling away of fear. For an extended time I felt forgiven, loved, euphoric. And then something even stronger: I stared at the chocolate dirt, the rocks, the sagebrush, and the sky. It wasn’t anything but perfect. And then everything was. I mean everything.

This is very difficult to describe, and beyond the above, I wouldn’t want to try. But for anyone out there who’s in pain, know that I don’t hurt so much now since I stuck my finger in the socket. The awareness may recede, but I’ll remember.

(My father never put his arm around my shoulder, right? So of course I don’t remember that.)

Previous post: Taos Mountain When the Cold Blew In