Hope of the World 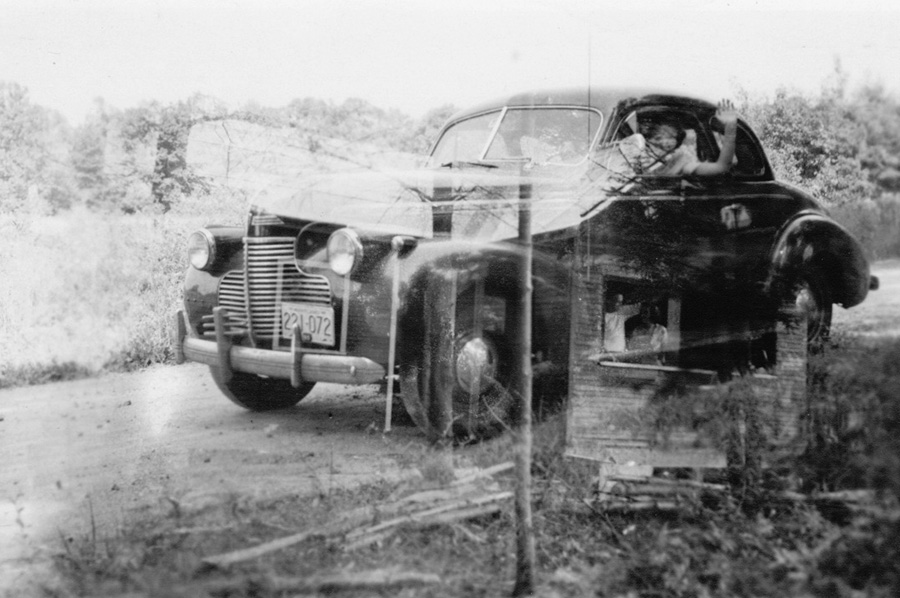 Don’t be hanging in between

Man, I know the feeling. This double-exposure from a trove of family photos I shipped back from Maine after my Aunt Mary died says it all.

I can’t make out the license plate—and what is that thing on the bumper?—but “family” suggests Maryland, West Virginia, or New York (Elmira, Big Flats). I remember double-exposures, too. That’s what happened if you didn’t wind the film between shots. Here it looks like the underlying (?) image is a couple standing in the window of a house they’re building. I imagine the woman in the car waving to them or the photographer. Looks like nothing in that field across the way. Reassuring and expectant. We can do this and we will. Makes you want to run out there and build a chicken coop.

There’s so much gold in these old black-and-whites. I’ve mentioned this before, I know, but now I have photos of my great-grandfather’s house from the same stash. (I’ll post one as soon as I can find it again. You have no idea.) John Valentine Farr worked in an office for the B&O, and I would have gotten his old railroad desk if my uncle hadn’t sold it to the cleaning lady. (She was more than that and had a heart of gold, but that’s the gist. No joy in gifting, poor old Bob, or hint of recognition that there were actual heirs.) At any rate, great-grandpa had a farm in Halethorpe, MD. Everybody had a farm, it seems. Grew their own food, kept cows and chickens. Must have been hell, I tell you.

When John V. and wife got tired of living in the big old farmhouse, they let someone they knew (relatives?) move in and built a smaller place out back. Prettier than any house I’ve ever lived in: two-story frame construction, covered first- and second-floor porches, gardens all around. And to think they did this on a railroad pension and whatever else there was.

I think about these things a lot, living here in Taos where the wealthy geezers grow. How people used to live, how we’re supposed to live right now. Boxes in the storage unit left unopened fourteen years, waiting for a break. More than one double-exposure around here.