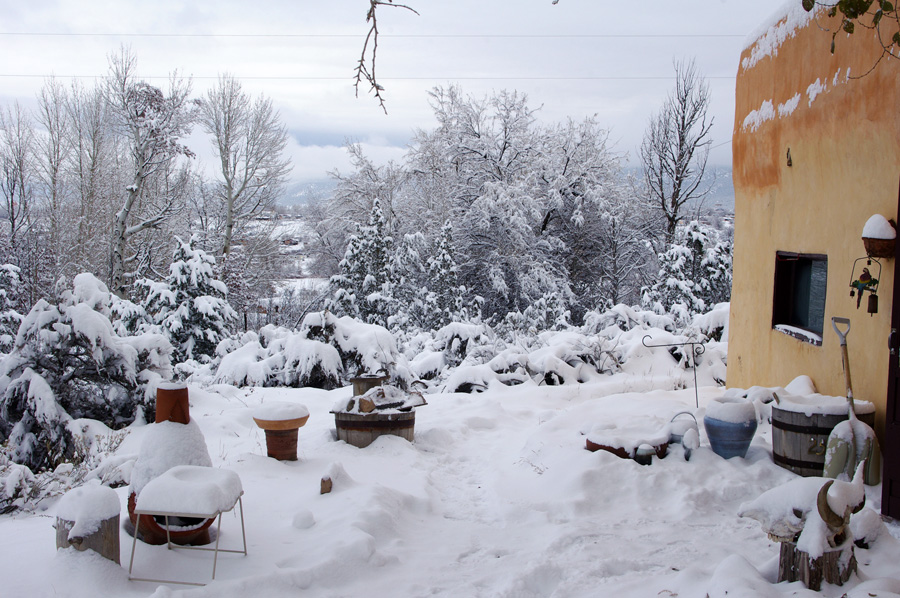 The wood stove is your friend

You can figure out how much there is. Maybe half a foot in places, but who cares except the pros? I don’t mean that in a bad way, it’s just something I’ve noticed in myself. Since moving to northern New Mexico fourteen years ago, I’ve seen so much of the stuff that the nominal depth doesn’t really mean anything. It’s just snow! Beautiful and exciting at first, and then you realize you can’t go anywhere. And after the white stuff melts, there’s this apocalypse of mud. The snow could last a while, however, if the cold sets in—not necessarily bad, considering.

I had to go up on the roof twice today, once to clear snow off the skylight to “fix” a leak, and another time to hunt for a missing bird feeder that the raccoons had stolen. Up and down the icy ladder in the cold, yee-haw. (At least I love a challenge.) One thing I remembered to do two days ago was spread a big plastic tarp over our humongous wood pile—we have enough to last until February—so I felt pretty clever when the snow began to fall. Unfortunately a tarp with that much snow on it weighs at least three hundred pounds, but these are things you learn—cover the wood, but have a plan of attack!

(Be sure to compare the photo above with the one in the previous post, by the way.)