The Neighbors Are Gone 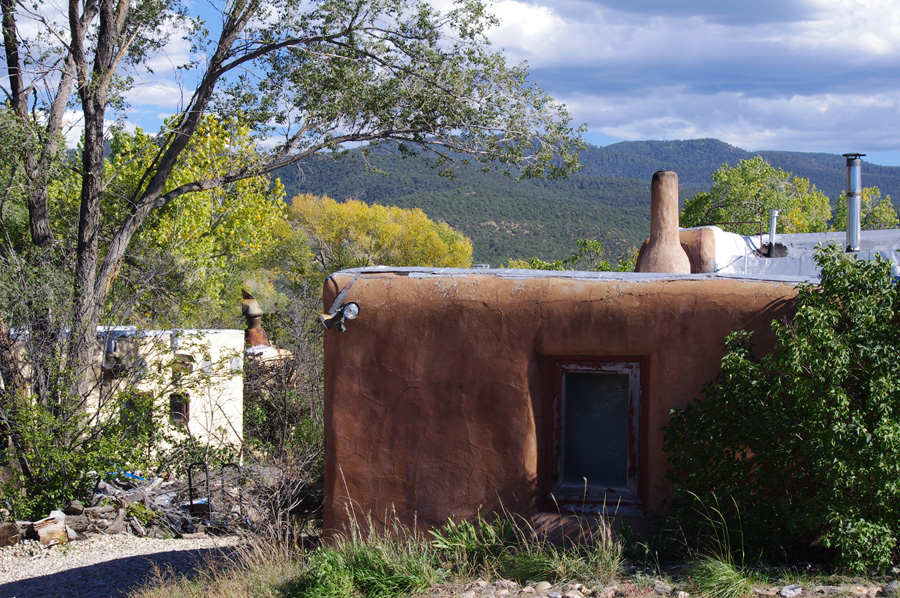 There’s a thing about life that few people know. What’s missing or hurting will always show up in some way—you can’t get away, it’s like gravity. From 2003 to 2005, I lived alone in the house in the background. My wife was in Dubuque, and the neighbors were here. Good people. I’d rented the place when she went up to Iowa to find work and take care of her mother. She came back to Taos in ’05 to move in with me. The neighbors were here.

We’ve lived here together for eight long years since. All that time, the neighbors were here. Until 2007, so was the landlord, in a studio apartment in the back of our place. Before he died, he willed the house in the foreground to the neighbor lady and ours to his niece. The two parties have been locked in probate ever since, to my mind entirely the neighbors’ fault, though what do I know—and what does it matter, except they were here.

With both houses hooked up to the same failing septic system, sharing the cost of upkeep and repair has been tricky. (Oh, the sewage stories I can tell.) So have a few other things, partly my fault, like when it got harder for me after their fortunes improved so dramatically and still they were here. With the property in probate, there was little our landlady could do that involved the whole place, and life-improving enterprises like fixing the driveway just never got done. The neighbors bought new things and followed a guru all over the world. We couldn’t travel and struggled to flush. They came back from airports in limos late in the night, to this place beside us, oh golly oh gee, and I never knew why. The windows don’t open, and there isn’t a bathtub. The roof leaks, and so on. For the last six and a half years though, since inheriting the place, they’ve been living rent-free…

And they just bought a house. Now the neighbors are gone. Show me my wounds, Lord, teach me a lesson. Everything’s there if you’re willing to see.

We won’t be here that much longer, anyway. Not in this house. We have it in pretty good shape, just in case—winter can jump right down your throat at seven thousand feet, and things move slowly then. But take another look at that photo: it all fits, everything! All that went down, before me and after.

The buildings that weep.

The mountains, the trees.

The air is so clean.

The sun is so bright.

It’s a privilege to have been here. It’s astonishing to be all right.