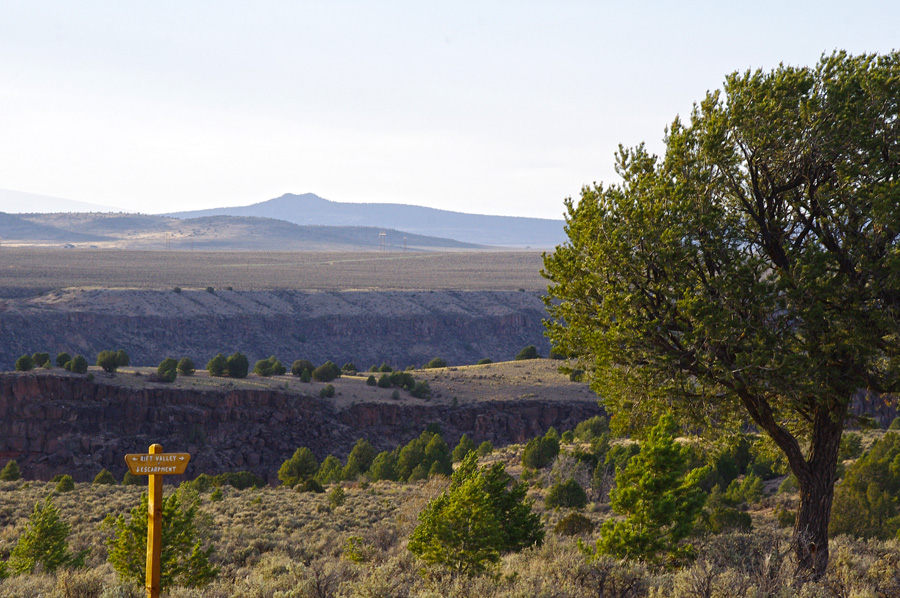 It was after Labor Day and all the Texans had gone home. When I arrived at the parking lot, I was all alone. There was no one on the trail. As hot as it was (90 °F), at least the air was dry, and I even had a breeze. Low humidity plus moving air means you actually feel cool once in a while. I wore my new Patagonia Drifter hiking boots and felt like one tough mofo just being out there for my usual four miles.

Near the turnaround spot about one quarter of a mile from the above shot and a good deal closer to the Rio Pueblo gorge that slope rolls into—the Rio Grande gorge is just beyond—I stopped to relieve myself in the shade of a certain juniper. As I was standing there, a large turkey vulture shot up from the Rio Pueblo! The water is hundreds of feet below, and the bird had been flying down where I couldn’t see it. That was the damnedest thing, seeing that buzzard spring right out of the earth. It made a very large loop over terrain just like you see here and glided slowly right past where I was zipping up, leaning a little in my direction to get a better look or scent from just 30 feet away. I wondered if I smelled dead or just plain sweaty.

There was another time that I remember being eyed or sniffed by carrion eaters. It happened just a short hike from Yellowhammer Farm in the Arkansas Ozarks back in ’71. I described the experience in a letter to a friend back then and thought I’d reproduce it here. Imagine actually writing a letter!—or typing, in this case. I had a small portable typewriter in my shack and would have written this by candlelight or kerosene lamp. I think it sets the scene rather well after all these years, and you can see why I’ve never forgotten that afternoon:

Got to describe something to you while the urge is here: yesterday I climbed up to a rock ridge up and across from our property, the very top of the ridge, about 150 yards of rock, flat, broken into many large chunks, with lots of caves (small) and overhangs, some rock faces as much as 25 feet or more in height. From up there you can see 300 degrees around, see for many miles, it is the most fantastic place I have ever seen in Arkansas, and it’s only a 15-minute hike from the edge of our place, altogether about 45 minutes from where I’m sitting now. The very top, you understand. Well, I was lying there sunning myself, lying face down on a large flat shelf of rock that jutted out, almost asleep, when I heard a strange, very faint, multi-pitched whistling noise, a barely audible sound which seemed to be going around in circles. I opened one eye and glanced upward just in time to see a large black buzzard quietly swoop past about 20 feet above me: there were two of them, actually, making 30-foot circles above me, using the airflow coming over the mountaintop, just whistle swoop checking out my flesh, you know. (I was lying naked on top of my clothes.) When I sat up they split, just as quietly as they had come. Man, that’s getting down to basics.

The sounds came from the feathers at the ends of the birds’ wings, vibrating in the breeze at different frequencies, and sounded like a very quiet bullroarer being swung around one’s head. Sometimes you can hear the tips of ravens’ wings make a similar sound when they glide by real close and there isn’t any wind.