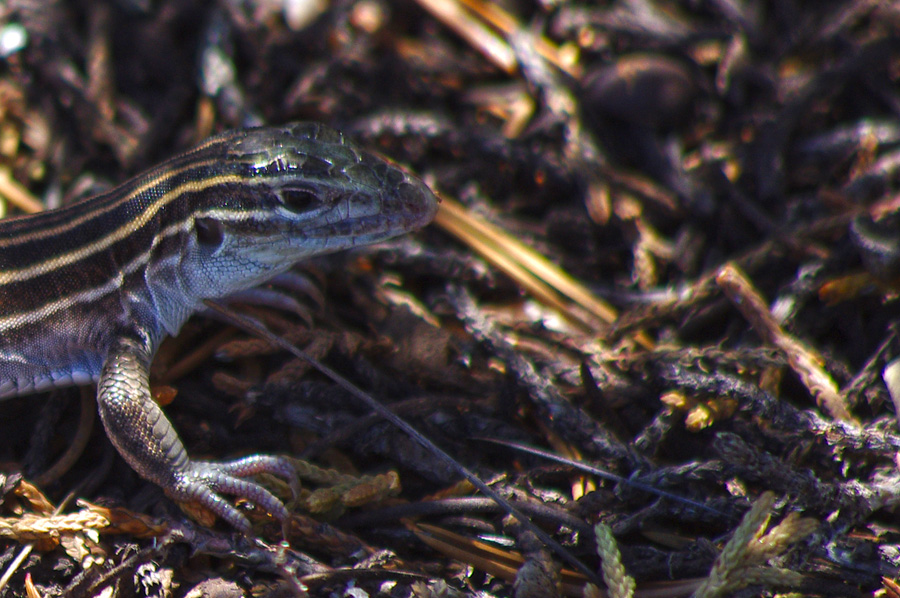 As I drove out to the trailhead for my four-mile hike this morning, I was feeling kind of old. Maybe it was the truck’s fault. When I got there, I saw three other vehicles and nobody around. The driver’s side door squeaked loudly when I opened it. Slamming it shut made it go BAM wocka-wocka rattle tink.

Body-wise, I felt great, you understand. Bouncing on my feet. Tough. Ready to go. But a little less hip and more of a relic. A testament to inherited vitality and stupid fucking cheapness.

The hike was fine, I made good time. It was only about 75 °F but hot in the sun. There was a strong breeze and almost no clouds. Dry, then, so a cooling effect. You sweat and dry off at the same time. My new Patagonia boots are tougher and more cushioned than what I was wearing before, and I flew over the rocky parts.

About a half mile from the turnaround, I came across a rattlesnake. Just a toddler, this one, about eight inches long. Either it had swallowed something too big for it, or someone had stomped it behind the head, which wasn’t in such good shape, either. The poor guy was obviously doomed. Actually, I thought it was dead, but when I poked it with my stick, it turned over on its back and wiggled some. Not knowing what else to do, I left it writhing in the sun.

As I walked on, I had a string of second thoughts. Now that’s kind of cruel. Even if it is a dying rattlesnake, it’s only a baby. You could have just as easily flipped it into the shade, or better yet, dropped a heavy rock on it where it was…

So I decided that’s what I would do on my way back. If a raven or a buzzard hadn’t gobbled it up and saved me the trouble, I’d put the strange mangled accident out of its misery and redeem myself, too.