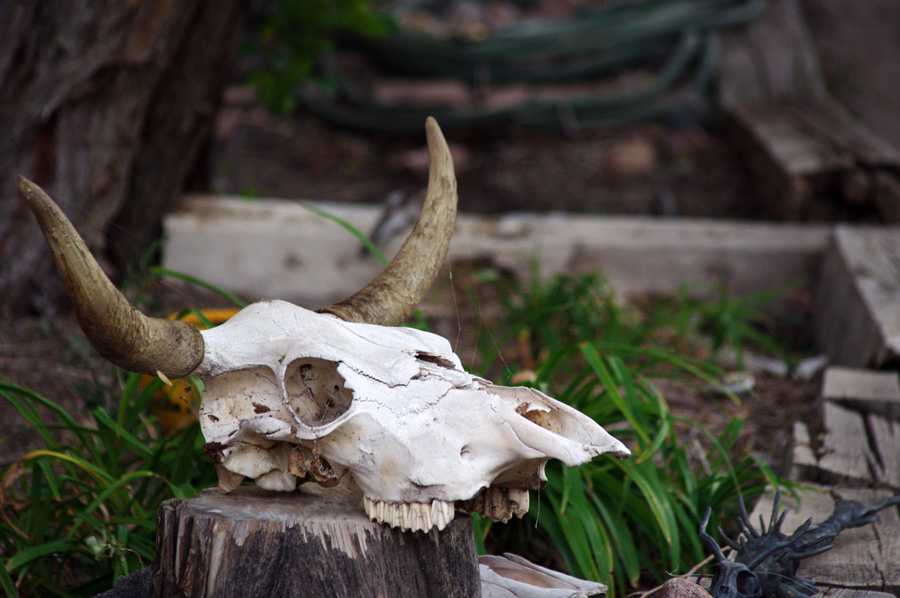 Found this guy upside down in a piñon tree. You can read that tale in BUFFALO LIGHTS.

Yesterday was a wonder. Real mountain weather. For most of the morning and afternoon, the air had an electrifying coolness under bright sun with just enough humidity to pull you in and not enough to make you leave. We drove into town on a water run to fill the 5-gallon jug at Cid’s. I found some Colorado peaches there the size of softballs and bought three for $5.38. Hell, when I was a kid, you could buy enough to have a peach fight with that.

On the way past Ranchos Plaza the sky was full of puffy white clouds, the temperature 71 °F. Utter perfection. Three out of four vehicles went by with their windows closed (presumably on AC), and they weren’t all from Texas, either. That used to be the qualifier, but the disease has spread. I don’t get it. Perfect air from God and hardly any takers.

Later on the clouds built up. The strange and mighty Southwestern storms wandered over the land at walking speed and dropped real rain. Way back East in Maryland, thunderstorms fueled by boiling humidity would roar in ahead of cold fronts and knock down trees. You could pretty much count on some kind of disaster. Here the things just kind of coalesce like planets out of primordial weather goo and reach enormous size, often without doing any damage or even raining very much except for when they do, and that’s when people die in floods that wash away their cars.

Out here where the skull lives on the dry south end of town, we had maybe 15 minutes of heavy rain around 4 o’clock. That’s a lot, in my experience. Wow, I have experience—you know what that means. Meanwhile my wife has taken to yelling about the humidity. I can’t tell yet if this is just surprise or if the humidity makes her tired. (If it’s the latter, then she’s gone native, too.) What happens when it rains like this in New Mexico is that everybody’s roof leaks. It’s quite a common theme. That’s because it usually almost never does rain and all those roofs sit baking in the sun. Stuff dries out, gets brittle, cracks, and goes unnoticed for years until all of sudden, you either need to do something right away or mop it up and never mind—the traditional approach in a land where mud houses slowly disappear.

There’s a place by the canales over the bathroom where the roof covering cracks and I caulk it every year once it starts to leak again. So far this monsoon season I haven’t bothered, but that means I have to lay a towel down in the windowsill every time it rains. Another lesson from New Mexico, where the less you need, the better, as you probably can’t afford it anyway.