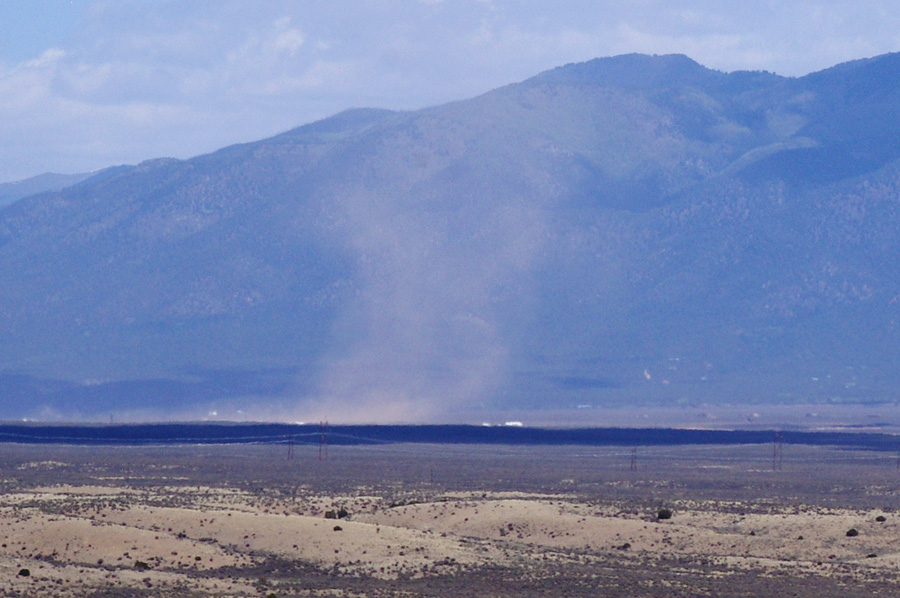 See that big dust devil crossing the valley in front of Lobo Peak? I saw a couple three times bigger than that the other day, more like giant tan tornadoes. (D.H. Lawrence lived for a time in a tiny cabin on a ranch partway up that same mountain, by the way. If you know where to look, you can almost see it.) The wind always blows, but with the drought there’s got to be more dust this year. The Rio Grande is completely dry in southern New Mexico, too. No one is forecasting an end to this anytime soon. In fact, the long-term models point to utter freaking hell for apple trees, alfalfa, and the water in your tub:

Indeed, assuming business as usual [no reduction in carbon emissions], each of the next 80 years in the American West is expected to see less rainfall than the average of the five years of the drought that hit the region from 2000 to 2004.

The aforementioned drought was also “the most severe event of its kind in the western United States in the past 800 years.” I’d be lying if I said that didn’t bother me. The thing is, though, there were still periods of “normal” rainfall between 2000 and 2004, so you could fool yourself a little. And even if the models are correct, there are bound to be enough wet years in there to give the realtors cover, dammit. I mean, if it were common knowledge we were doomed, lots more of us could buy a house if we were nuts.

Anyway, I’m always wrong about the end of things. When we left Maryland, I thought the Bay would be a stinking cesspool in 10 years. The last time I looked, it was still there with a fancy price tag on it. Birds still flew and fish still jumped. You can strategize your life away and miss the best thing that you ever could have done.

When we bought our first house in Maryland, the agent—a dear old friend of ours—told us to make sure it felt like a place where we could spend the rest of our lives. Just like she did, I’m sure, living her entire life within short drive of her father’s farm. I don’t remember my response, but probably I lied. After all, I’m a broken Air Force brat who went to high school in three states, not the best material for bury-me-in-the-same-cemetery-with-all-the-other-dudes-named-so-and-so. My wife is brilliant and she picked me anyway. Go figure. Actually, I have. This means we can live most anywhere, and right now oh are we ever here.

Load the rifles. Tell the stories. Treat her like a queen.