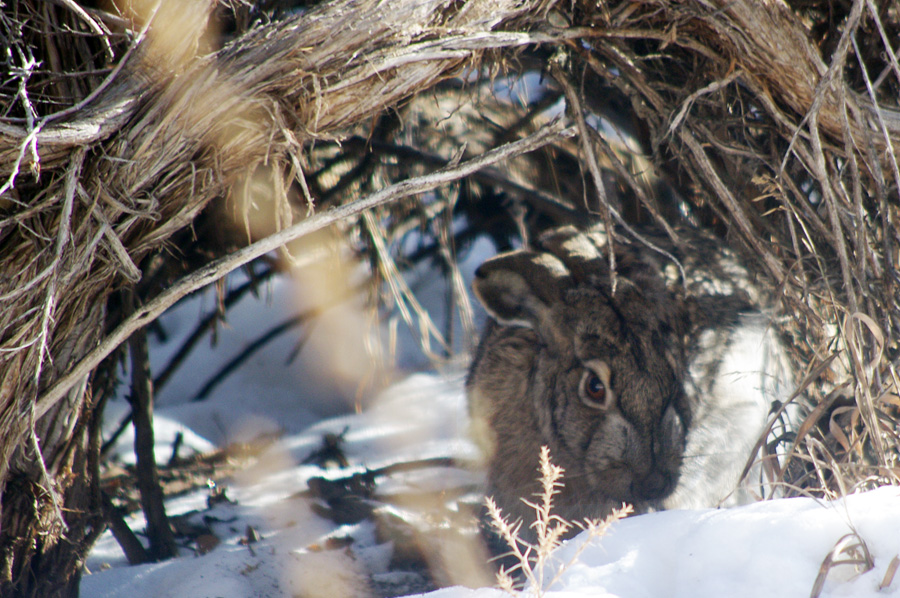 Inside a rabbit’s eyes, a realm where we’d be ripped to shreds

Just possibly the best rabbit photo you will see today. Heh. It looks like a cottontail, but I can’t tell. Jackrabbits are larger and have black tips on their ears, and that actually might be the case here. The funny thing is, for the last few days, I’ve “scared” (if that’s the right word) a huge gray jack out from under that very sagebrush. It moved quite slowly—for a rabbit—and gave me a dirty look, so we may be talking about the same beast.

Large el Norte jackrabbits tend to walk on all fours when they’re not in a hurry. This can be very disconcerting from a distance or at dusk. Seeing one climb a rocky slope, for example, can make you think you just saw a little old man crawling up the hill. Then again, maybe you did see a little old man, or even a brujo.

Shape-shifting wizards are all the rage in these parts. So much so that I always take note when I see a raven, for example, and for good reason! There’s a remarkable account of a raven/brujo sighting in TAOS SOUL: Love Stories, Heroes, and Wild Adventure in the chapter titled “Message for the Fourth.” Here’s an excerpt to whet your appetite:

It happened early on. I was standing on a rock next to a tall Ponderosa pine on the edge of a precipice at the actual entrance to the canyon, watching a raven banking in a tight circle in the stiff wind just above me. I was staring very carefully to make sure I had it pegged, because the bird had made a noise I’ve never heard a raven make before: it whistled at me with a sound very much like the shriek of a hawk, only more full-bodied, longer, and strangely piercing. This didn’t make sense: why would a raven, of all things, be whistling at me? I heard the sound again. Just then the raven dived in my direction, descending to land in the pine tree, I assumed, except it kept on coming. It was diving straight at me, and I saw the raven’s face front-on. Not with my eyes, however, but with my mind: instantaneously filling my entire field of vision was the close-up face of the raven, with gleaming black beak and big red eyes! I ducked, obviously, heard the raven whistle again, and decided not to linger. It was as if the bird had projected an image of its warning face directly into my brain…