Hiking in the Snow 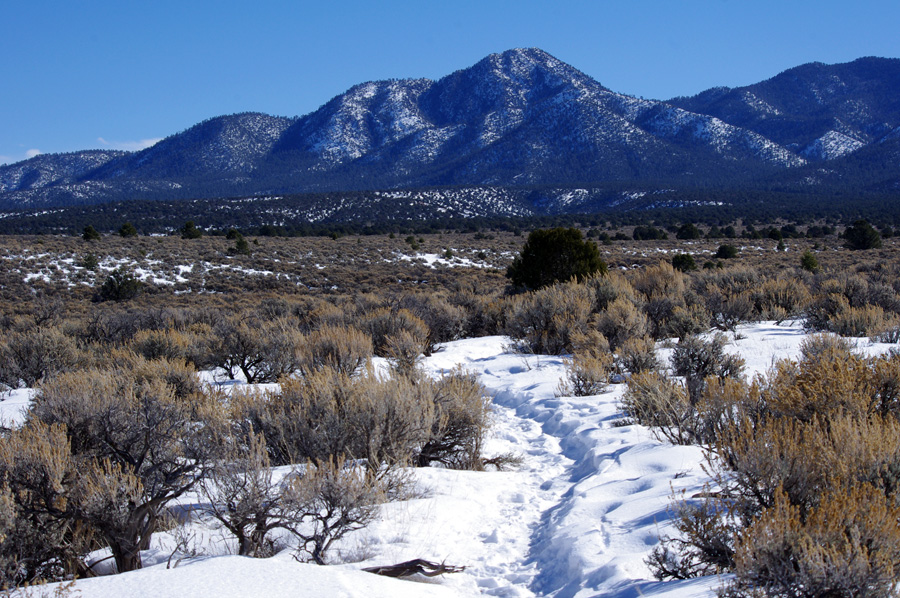 About 10 °F when I took this shot. Still a mile and a half back to the trailhead.

Okay, it’s damned cold, but I have to exercise. How hard can it be? As it turns out, not very. The hardest part is deciding to go in the first place.

This is Taos Valley Overlook, a BLM (Bureau of Land Management) property encompassing 2,581 acres. Right there is something to blow the mind. (Our old home in Maryland sat on 2.57 acres, plenty big in those parts.) My walking trail is the first two miles of a nine-mile loop called the Rift Valley Trail, or four miles total to the turnaround and back. When I get really good, I’ll walk the whole thing. I’ll be so skinny and tough, all my pants will fall down.

People with much more experience than I have already know about walking in the snow, and maybe I did once, when I was young or living in another land. Since I love repeating the obvious to myself and anyone who’ll listen—over and over—especially primeval banalities, here you go: 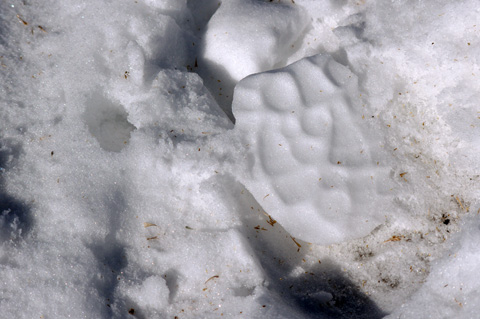 My own lifted, frozen track from three days earlier

I’d taken this same route three days before. The snow was of a consistency that an imprint of my boot sole would stick and lift, then drop off when my foot moved on. Very fragile artifacts. But in the double-digit below zero cold, some of these froze hard enough to withstand 50 mph wind (!) and partial melting in bright sunshine long enough for me to find them again. Each one was partly out of the track, the original holes. It looked like they were walking on their own.

They’d have had an easier time of it than I did, being light. The hardest thing about walking in the snow is that your foot sinks in, the white stuff sucks you down, and your foot’s a little heavier when you pick it up. There’s also nothing like a normal stride, except perhaps in powder. Even then, you feel a little weight. Resistance. Nature telling you to take it easy. Being two miles out in stuff like this had me panicked at first, until I learned to amble, take shorter steps, and forget my stopwatch.

The other thing is the cold. One needs to be warm. At 7,000 ft. with full sunshine on the snow, you’re in a kind of magic land, so this is easier than it sounds until the wind picks up. But it turns out that 15 below overnight is a good thing when it comes to snow, because it hardens up in places! Squeaks, too. You can walk on top a little, and that makes me feel I got away with something. Hell, just being here and not dead does that.

Anyway, I did it. Four miles in the snow, and more than mentioned here. It’s January, and I have a tan.