The Slow Unfolding of Accidental Glory 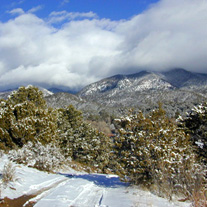 When we landed in New Mexico, our first home was in San Cristobal.

Hardly anyone can imagine, even in New Mexico, how pristine those mountains are and what a holy joy it was to live there. The upper end of the valley backs up to wilderness. You can follow a trail all the way to the source of San Cristobal Creek, so they tell me, although I never did.

In San Cristobal, we could hear elk bugling in the fall. Sometimes they grazed within sight of our house. Once we took a walk and found a fawn curled up in the grass. A bear destroyed the compost bin and broke a window in our landlady’s car. Hummingbirds flew in through the unscreened windows—I had to stand on a chair to catch them and let them out! There was a mountain lion in the neighborhood, and coyotes were everywhere. I saw a golden eagle dive down out of the sky and snatch a prairie dog. And almost every day when there were clouds, they tore themselves apart colliding with the peaks. Forests and mountains, the unending spectacle of sun and sky, and air so clean and cool, your lungs broke down and cried.

This is where we started, mind you.

At the time, I wasn’t ready to take care of us like I had promised. Driven mad by extraordinary guilt and fear, I saw demons everywhere. Regardless of the unearthly wonderment of living in such a place, our days were often filled with pain and crisis. Locked into a confrontation with myself, I couldn’t even trust the one I love. It was like skating on thin ice while carrying a hungry bear.

I’ve been reminded of all this while going through a decade’s worth of photographs as I revise my BUFFALO LIGHTS book: so many places, people, vistas, and adventures. So many journeys, struggles, and discoveries. More history and new horizons in 11 years than most people experience in a lifetime. Way beyond merely staggering. Insanely glorious, in fact, despite the rolling shitstorm of guilt I’d brought with me from my old life, the horror of no money, the doubt, confusion, and despair.

In other words, I DID IT.

Just getting away from the East Coast and landing in San Cristobal for the first 18 months was a major lifetime coup. Eleven years later, we’re still here in northern New Mexico. Without inherited wealth, dividends, or sugar daddies, just our wits and talents and my poor old Visa card, we’ve survived and grown in this incredible, beautiful, difficult part of the world. After all this time, it appears I’m a goddamn intrinsic success, and the astonishing thing to me is that I did all this while I was crazy.

Imagine what I could have done if I hadn’t been afraid!