He Still Likes It 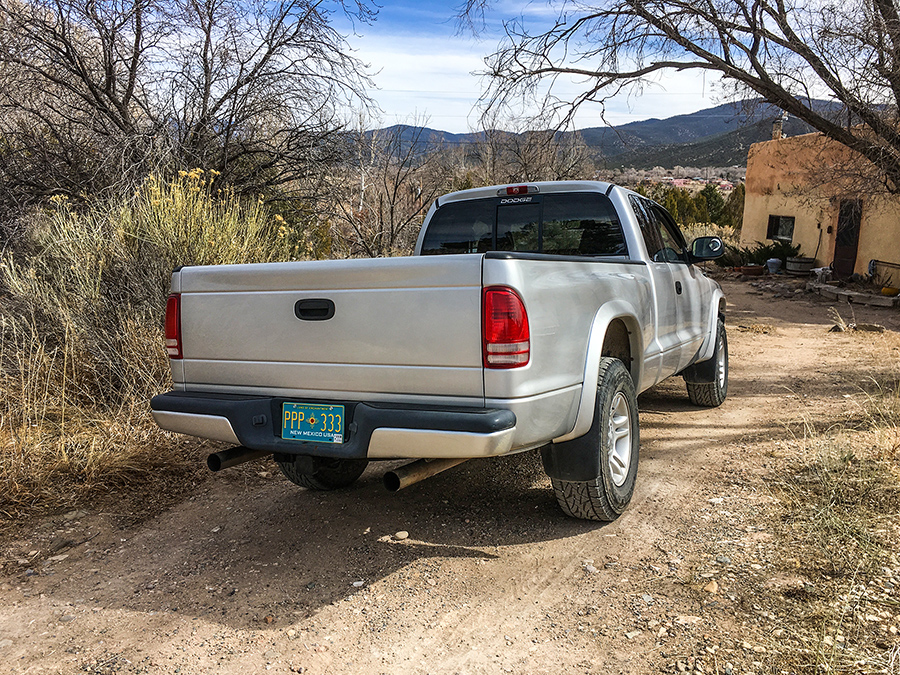 Your gentle reminder that I photoshopped the fake license plate above

About ten days ago (?) we had a little snow. Just a few inches, and it was quickly gone. The drought-parched soil soaked up the melt water so fast, it was like the slush was only visiting. While it was here, though, the Dakota got “stuck” backing up the hill. The rear tires simply couldn’t get enough traction, and look at them! Undeterred, I turned the tiny dashboard switch from “2WD” to “4HI” (4WD, high range), teased the gas a little, and damn if it didn’t climb right out of there. That 100 foot stretch was the total extent of all the four-wheel-drive driving I have ever done and I am sold.

This is no ordinary 17-year-old compact truck. Purchased originally via special order, it came from the factory without any extra chrome or decals. (I didn’t know one could do that.) Nothing external screams “4X4!” or fanboy slogans, yet it’s actually a Sport Plus optioned to the gills. It has the 16-inch alloy wheels, for example. When I peered underneath to check the spare, I was astonished to see the fifth wheel was a pristine alloy one as well and sported a brand new, unused tire of the same make and vintage as the others. I’ve never in my life bought five new tires, but the last owner did. Usually the spare on a used truck is a bald piece of crap mounted on a rusty old steel wheel that never matches anything.

Speaking of rust, I’ve found some more. For a truck that lived in northern Illinois, you’d surely think so. The chrome plating on the tailpipes has a few brown spots, for example, but nothing I can’t live with. So the adventure is going rather well. Now I have the means to haul stuff from the moldering ruin in the background. This potential is going to shift some factors in our favor. Even if I’m wrong, it still sounds wonderful and I don’t care.