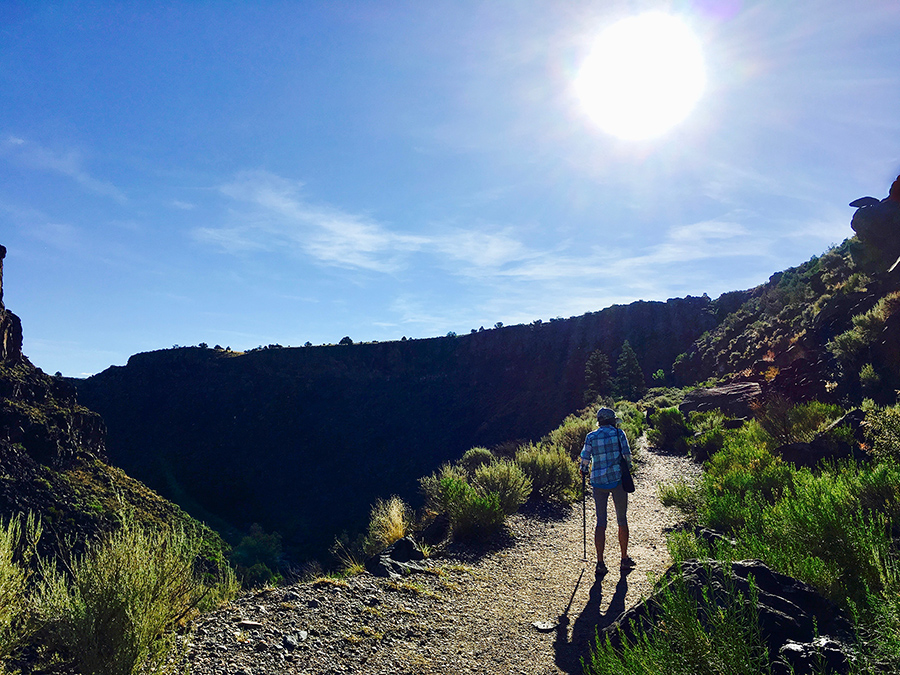 Onward to the rim!

It’s called the Slide Trail, and it’s not for you if you can’t fly. See the big notch in the shadowed cliff face at the far left? That’s where we’re heading in this shot, seven hundred feet above the Rio Pueblo.

The trail is actually old county road 570—yes, you’re looking at a road—that used to go from the south end of Taos to the Taos Junction Bridge, just below where the Rio Pueblo flows into the Rio Grande. As I’ve mentioned here before, a major rockslide blocked the lower end in ’93. The state decided it was too dangerous to clear and closed the road for good. Judging from the boulders that have fallen since and what it feels like when you walk it, that was very wise. There’s a short piece still open at the bottom that leads up to a trailhead. When you come back, you can turn left at the bottom and follow the river to Pilar or cross the bridge and climb a fearsome set of gravel switchbacks on the way to various points west, including the imaginary town of Carson and another Taos junction at U.S. 285, an amazing two-lane highway that runs 846 miles from the Colorado state line to Española, Santa Fe, Roswell, Artesia, Carlsbad, and into deep West Texas, ending at the town of Sanderson, where you must never go.

In the old days I was glad to see it. There was a “thank God it’s open” gas station there on U.S. 90 where I used to stop on trips from Austin to Big Bend. Then again, the place I’m thinking of might be not be Sanderson. Don’t go there anyway, but I can see the station—a station, some station, the archetypal station—in my mind’s eye now just as I saw it rolling into town: dusty and rusty even then, the only thing lit up at night. (Zoom out at that link, I might mean Dryden.) But it was definitely Sanderson, at a late-night cafe on the western edge of town, where the state cops tried to mess us up one night in ’65. There’s not that much to tell, except the tenor of the times.

I was taking three friends out to Big Bend over spring break in my ’58 VW. We were driving through the night from Austin to make it to our campsite so we’d wake up in the park with three whole hours sleep if we were lucky. Fine young men, hi-ho. This was before things got outrageous in the culture. None of us had real long hair and only the art major had any dope—they always did before the rest—but all of us were weird and scruffy. The Volkswagen, too. In far West Texas then, it screamed goddamn hippie anti-war protestor or at least implied an openness to change, so basically the same. At any rate, we pulled into this place in Sanderson, hesitating for a moment when we saw the highway patrol cars in the parking lot because we knew, you know, you just did then, but in we went because what if they’d already seen us? The tableful of troopers watched us while we had a nervous meal and tried not to look back. When we were finished, I was last to pay and saw the state cops laugh, then two of them got up and started walking to the door.

They sat in their car with the motor running until I pulled out and off into the night, but I saw the headlights coming in my rearview mirror. I drove along at just under the speed limit. The cops roared up so fast and close, I thought they were going to ram us off the road. They stayed there with their high beams on (no flashers), hanging on my bumper, for a damn eternity, several miles at least while we waited for the end, until they dropped back hard to pull a U-turn and go home. Way to scare those college boys from godless Austin, yet I automatically survived.