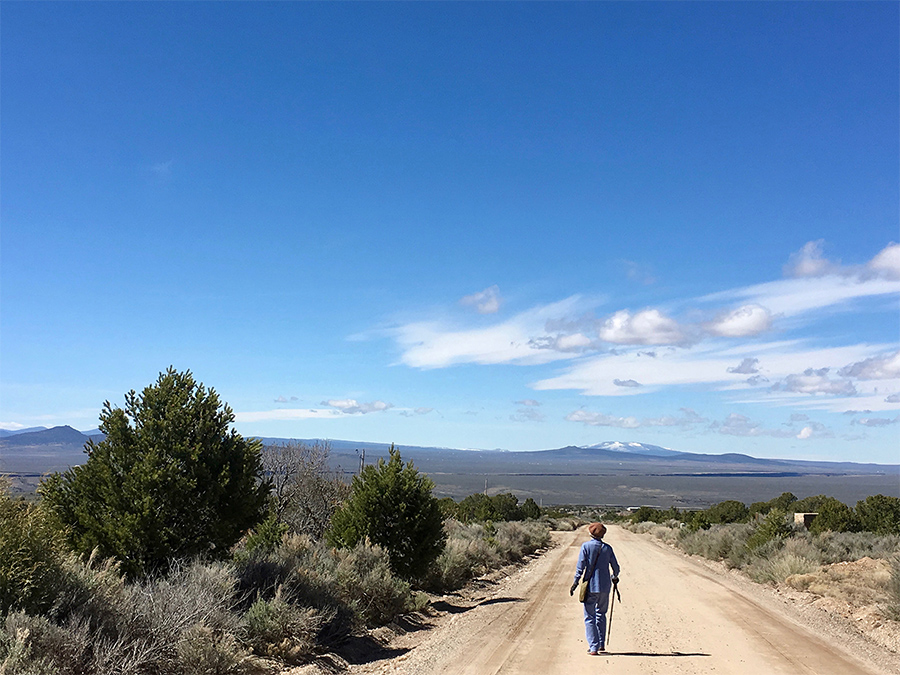 My heart rate was pushing one hundred thirty-two beats per minute near the top of the hill. I thought that was a bit much, but nothing burst. She flew on ahead the way she always does, sometimes with her arms stretched out like wings. (I can beat her on a bike, but that’s it.) There hasn’t been a time in decades of walking and running together when this wasn’t true. Her pristine lungs flood her tiny little body with so much oxygen, her muscles run on light. Whenever I see her on the bathroom scale, I ask her, “Do you still have weight?” and when she nods, I tell her, “Good!”

The air was perfect on this two-mile hike. As mentioned dozens of times before, the thing about New Mexico is the air. It’s like you could live forever in this air. There were times in Maryland, mainly in the summer, when the air would sap your will to live and melt the corpse, and then the flies would bite. This air right here is pure and dangerous.

As we reached the turnaround near a house back in the trees, we heard a rising, yelping wail. It was coming from a pack of “hounds,” I’ll call them—hunting dogs, I think, not large but plenty savage. There must have been fifteen or twenty of them, and they were loose…

No one came from the house to call them back, if that was relevant. In seconds the dogs were upon us, making an enormous din. The hair was standing straight up on their backs. Some snarled with bared teeth as they approached, while others yipped and barked as they tried to surround us. I was worried but not panicked. We kept on walking, dragging the mob along with us. There were too many of them for me to stab or bash with my hiking pole, and I knew the ones I missed might go berserk and overwhelm me if I tried. Every time I turned around to face them, they’d slow their advance but bark all the harder. I couldn’t believe how many of them there were.

As we continued down the road from where I figured the dogs belonged, the pack thinned out a little as some dropped out and vanished in the trees and sagebrush. After a couple of turns in the road, I couldn’t see any of them following us and hoped the episode was over. A minute later I heard barking again and turned around: there they were, about fifty yards behind us, having followed for at least a quarter of a mile! I was at my wit’s end and decided to stop and hold my ground, while my wife kept walking as normally as she could. The pack approached to within twenty-five or thirty feet. Finally, all out of options and extremely pissed, I bellowed in a loud, firm voice:

The closest dogs stopped barking instantly and turned around.

The ones in the middle shut up and turned back also.

The few remaining barked a little longer and reluctantly took their leave. In less than half a minute, we were all alone again. “Go home” was obviously something they understood. Who knew shutting down a massacre was so easy? “Bad neighbor!” my wife said of the assumed owners of the hounds. No kidding, I thought, realizing that the old el Norte metaphysical dynamic, where you experience the greatest joy (“the air!”) alongside something that you fear or hate the most, had struck again.

A universal truth, of course, just easier to see here where the shadow never hides.