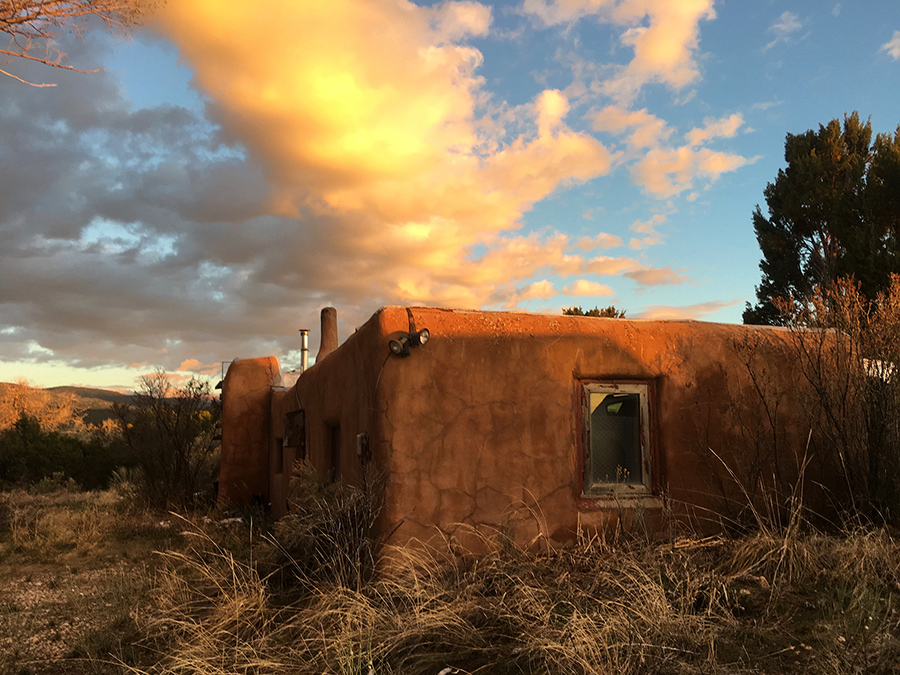 Not ours! Empty dwelling nearby, Anglo owner-built or modified (pre-hippie, c. 1960).

Haven’t been able to write for weeks, but it’s only a blog, so let’s give it a go [clears throat]… Remember the tree? It’s still there, hah! A couple of guys came by yesterday to read the water meter that’s now underneath it. They freaked out a little, but I knew they could get to the cast iron cover without needing to saw. The shifting has begun. The disengagement. Thank God.

I’ve acquired so much knowledge here that means nothing to strangers. That’s just how it is. Like the time a flying squirrel got into our basement one summer in Maryland by coming in through the oil furnace chimney. Oh that damned furnace (converted from coal). In the old days in Texas, you could heat a whole house with a little gas heater that plugged into an outlet that stuck out of the wall. Frigging high pressure and all, right there with a spigot, and somehow the whole state still never burned down.

(All this damn bullshit, fingerprints on the lens.)

All I care about now is my honey and me. I crawl into bed late and feel that she’s warm, put my hand on her cute little butt. There’s an island of okay that lets me sleep, too. My favorite part of the day. This morning as I staggered naked erect, she leaned into the bedroom, still wearing her bathrobe: “It’s warm in here [meaning I didn’t need to hurry and build a new fire], but I’d be glad for your company…” Glad for my company! I don’t think anyone ever said that before. I felt privileged as hell. In the kitchen she grabbed me by the shoulders and kissed me good morning. I love to be touched—does anyone know that?—did anyone do?

Yesterday I got pissed when she came back from the store with low-sodium crackers. This has been happening for thirty-five years, but then so have I. She’s an intuitive shopper (double Pisces) and buys what she feels. My salt training never has stuck. In the same vein, I want to buy her an iPhone instead of her beat-up old flip phone with the impossible battery. She treats digital gear the same magic way as the crackers and I’ve made her feel small, so I think she gets scared. This actually just hit me, as I’m galactically stupid besides being a jerk.

“You don’t have to know how to filter the “Previous Recipients” list in your Mail app, I’ll do that for you,” I said while she cried on my shoulder because the email to her sister got stuck. “YOU KNOW BEETHOVEN SONATAS, forgodssake!” Does she ever, oh man, and she laughs like a bell.

Real life in the ole present moment. Let there be music and salt, all forgive and move on.