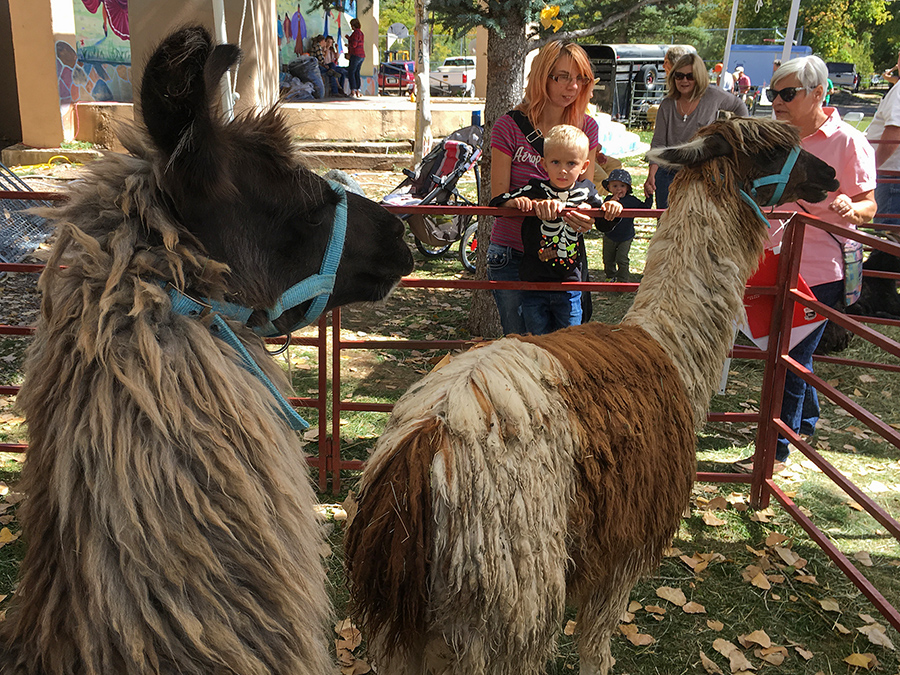 Okay, nobody got hurt, at least not while we were there, but they certainly could have been. Just look at these monsters. They were making funny growly noises the whole time. I thought for sure the two of them were about to rip the kid’s face off or start spitting horrible slime. Never trust a pseudoruminant, I say. They’re ones with three stomachs instead of four. This was at the Wool Festival in Taos, a good place to visit on a wholesome Sunday afternoon, especially if you like wool.

There were a few folksingers in evidence. I heard but did not see a presumably fine fellow with a nice voice sing “The Old Grandfather Clock” over the PA system. Not exactly a folk song, but that was the evidence. There was also lots and lots of wool. Everywhere I turned, women were stroking balls of yarn or sweaters and murmuring appreciatively. (Who knew that was all it takes?) The ratio of women to men was approximately 2,000:1. I could see Kit Carson’s grave across the fence and wondered if he was lonesome. Did I mention there was wool? I did enjoy walking around with my beautiful sweetheart, however. She’s a fabric stroker from way back. Otherwise, I didn’t see any funnel cakes (just wool), and we didn’t stick around for the speed spinning contest. That’s the one where the winner is the person who spins the longest piece of yarn in two minutes, then they pass it around so everyone can feel it.

For some reason this reminds me of the scene in Catch-22 where Milo Minderbender is selling chocolate-covered Egyptian cotton and trying to get people to sample it. Not wool, though, so never mind.