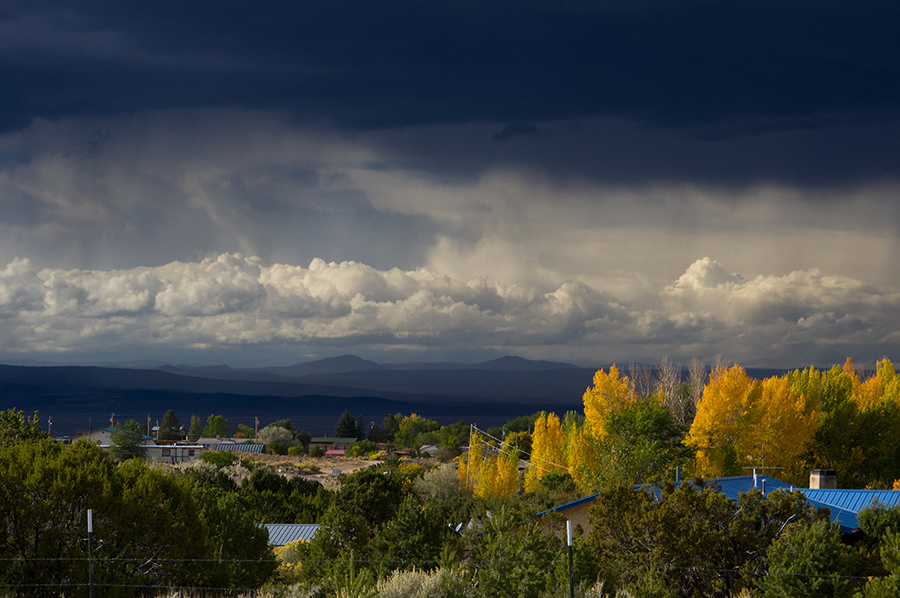 I couldn’t possibly make the left turn with a big red wrecker truck hanging on my bumper at sixy miles an hour, so I drove another half mile to where I had a turn lane, circled right back to the highway—empty now, thank God—and cruised toward town until I found the place again. There was nothing but a stop sign at the entrance to a gravel road. We turned and found to my surprise that we still had quite a ways to go. The mostly straight road ran steeply up the side of the mountain. There weren’t any houses anywhere until we’d gone about a mile and a half, and then we found a few. The one we’d driven up to see was where they said it was. What the listing info didn’t show was the view that kicked me like an atom bomb.

By that point we were high up in the trees, but to the north and west a panorama opened up to drive me crazy. Imagine a view roughly like what you see above except you’re looking down instead of gazing outward, and of course those houses aren’t there, either. There’s a thing that happens here when you go high enough in these mountains. Maybe it’s the cosmic rays. But something changes above eight, nine thousand feet. It’s like being in a temple. An impossibly huge and limitless holy space where you instinctively lower your voice. The air is clean and cold. I mean it’s really clean. Most people never get to breathe this air. It alters consciousness on the spot.

I guarantee you there are plenty of people right here in Taos who have never felt what I describe. Number one, you have to go there—it doesn’t come to you and will be hard to reach—and number two, you have to be receptive. Not everybody is. It’s not that such-and-such is “pretty.” It’s not. It’s goddamn scary. It’s more than you can stand and yet you can’t resist. It’s wild and beautiful and terrible because nothing human matters. It’s a completely different state of being, like dissolving in the juice of God. You simply never want to leave. That’s important, obviously. How else could you stay? No doubt I’d end up married to the sky, but I’d still risk it.

Next post: So That’s What the Noise Was [Updated]