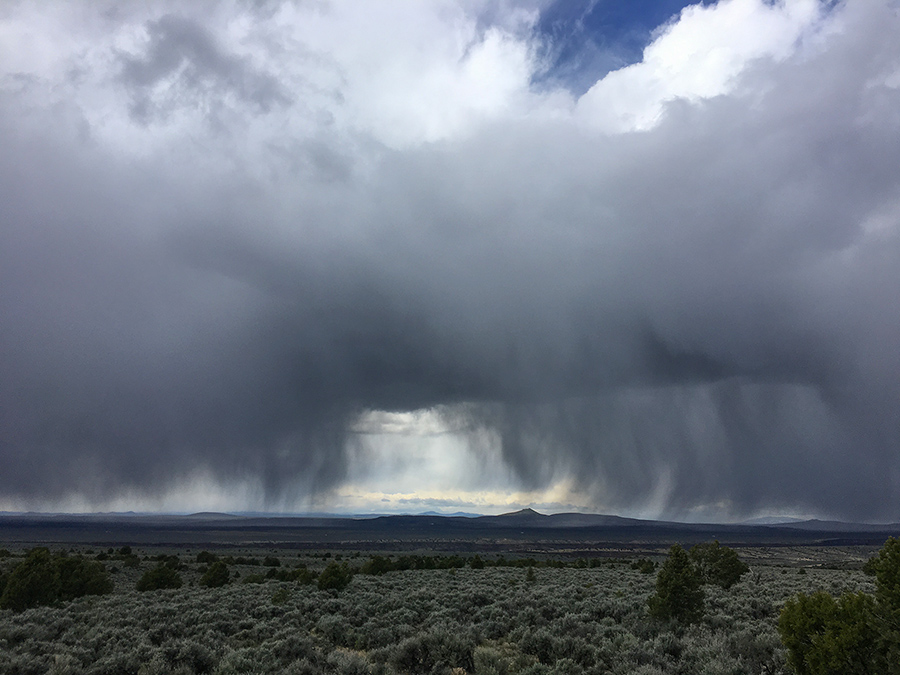 Looking west from Taos Valley Overlook today, after the slaughter (see below!)

The first thing was, to kill them all: big black flies! You know, the kind that get inside the house and buzz around at night, thonking into your lampshade, the ones you can’t ignore. But this was something out of a nightmare: each of the three small windows in the bathroom was covered with at least a dozen, crawling back and forth across the glass. Naturally, I wondered where they’d come from, and the answer muttered darkly in my brain.

Maybe I was wrong, I thought, but only for an instant. Grabbing a nearby swatter, I immediately attacked, wap-wap-wap, until all movement ceased. There were dead flies on the floor, dead flies in the bathtub, dead flies in the sink. Dead flies where I’d never find them, either. These didn’t seem to move so quickly. Of course not. Damn. Not wrong at all. Anyway, there was no way they could have gotten into the house all at once like that. Besides, it was a cold, blustery day, not fit for invading moscas. No, these guys were native. These guys hatched.

After an early warm spell in March, we had an aggressive infestation of mice. They hung out in the bathroom and the kitchen, the added-on rooms that aren’t adobe, where loose boards and hollow walls afford all kinds of hiding places. The cat did her bit and ate the stupid ones, but the others roamed at will and left mouse shit in all kinds of places one would rather not imagine. The worst place was the bathroom “cabinet.”

I don’t know what to call it, really. When the bathroom was added on to the original old adobe house—that should give you pause right there—the plumbing behind the bathtub was sort of walled in with plywood and rough boards, but there’s a space with shelves back in there, except they’re not closed in. You can see the back side of the concrete blocks that make the outside wall. In other words, anything that gets pushed off falls into the blackness and is never seen again—another thing you just can’t think about because you have to function.

At any rate, that is where they were, and I prepared to hunt the little bastards. This time I didn’t use the old reliable mouse traps with the metal bar that’s on a spring and comes down wham, but opted for new-fangled plastic ones that don’t work worth a damn. That is, yes, apparently they worked, but not the way you’d want them to: namely, the traps just disappeared. That’s right, dragged or flopped, whatever, gone forever in the Place That No One Sees. Were the victims dead or merely angry? How was one to know?

Believe it or not, the depredations stopped. I may or may not have smelled decomposition—in this environment, it’s hard to tell—and soon forgot about the nasty business until today.

You know what must have happened, right?

There must have been a carcass, maybe two, back behind the tub and inaccessible, but not to flies. One got in and laid some eggs. The eggs hatched into maggots. There were many pupae. The adults emerged today and headed for the light, still cold and groggy as I smashed them into bits!

I needed the vacuum cleaner afterwards. The lights went out when I plugged it into the power strip. How typical! One wonders if the hatching’s done. [Note from 5-9: not yet…] The bounty of the Lord is everlasting, but loaves and fishes next time, please.