In a Dangerous Land 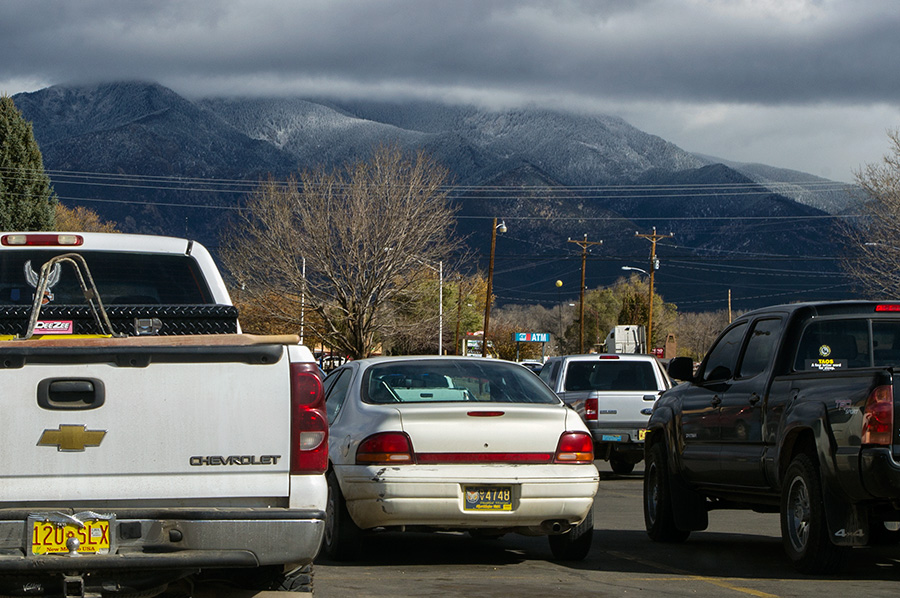 From a supermarket parking lot

We were zooming around the Washington, D.C. beltway doing eighty in the rain like everybody else—God knows how many lanes wide this was—when a semi passed us on the left and sideswiped a bus, which damn near rolled over and took the next exit with pieces of the body flapping in the wind. The whole thing was over in thirty seconds, and of course the semi never stopped. It was the second accident we witnessed that day or maybe the third. Twenty years ago at least that was, though it feels like yesterday in Taos!

Even further back in time, I once found a great deal on a certain tape deck at a discount stereo place in downtown D.C. (This was before big electronic retailers like Best Buy, although there were a few Circuit City stores out in the suburbs.) The store fronted the sidewalk and was somewhat battle-scarred, with bars on the door like a jail. Inside was a skimpy showroom. The atmosphere was tense. I showed the salesman the ad and got the lowdown: yes, they had one in back, just pay at the register. But I couldn’t walk out with the item, because they’d had customers get robbed walking back to their cars. There was a system, however. He had me go get my car and pull up right in front. After we pushed open the rear door, he dashed out with the box, slid it onto the seat, slammed the door shut, and boom we were gone! A different way to shop, I will say that.

Back at our home on the Eastern Shore, violent surprises were more likely to be associated with messing around in boats or mowing the grass. There was danger from the elements, but this was slight. A heavy rain might flood the basement in the fall and threaten to douse the oil furnace. Every now and then a tree fell down. Hurricanes and nor’easters provided the most excitement, although not every year, and most of what there was to fear walked on two legs, anyway: politicians, city slickers, cops in helicopters, farmers spraying herbicides…

When we moved to New Mexico in ’99, I was fond of saying that I wanted to live where Nature dominated man and not the other way around. A few months later, an early October snowstorm nearly had us sliding off the road on the side of a mountain, and I got my wish. While “off the road” in Maryland meant getting muddy in a ditch, here it might mean landing upside down at the bottom of a gorge. Taking a day trip in the winter carried risks as well. We quickly learned that there are places where our cell phones just don’t work and you can freeze to death at night if no one comes along. Without the infrastructure of more populated regions, it really does come down to you and God and pay attention if you can.

“In a land of mud and spirit, the danger is a gift.” That’s from BUFFALO LIGHTS, Chapter 40 (“The Spirit of a Place and How to Find It”), the true story of how we survived a New Year’s Day encounter in the middle of absolutely nowhere with the most awful, truck-destroying mud I’ve ever seen—if I’d stopped for just one second, we’d have had to spend the night at ten degrees and hike out in the morning. To this day, that remains a peak experience in my memory. Some of my best times tend to happen when I’m almost killed, so please remember that if I don’t make it.

Our Tuesday round-trips from here to Alamosa, Colorado have an element of this. The first sixty miles from Taos to the state line go through country inconceivable to most of you. It certainly was for me before I saw it: almost no one anywhere, just elk and antelope and the occasional rasta vegan; mind-exploding vistas of rock and sagebrush; snow-capped mountains that go one forever; a sky so big that you could die and it would be all right. Driving back at night requires super-human concentration or impairment so extreme you never think about it. There are no shoulders and the pavement is essentially unmarked. Semis loaded up with hay (no running lights!) shoot by with a roar on their way to horsey villas in the south. If the light reflecting from your headlights moves, you’d better already be on the brakes. Running all this in the rain deserves a medal! If you go “off the road” on some stretches, they may find you three days later from the ravens and coyotes. In other words, I mostly like it. Every time we start, I yell, “Oh my God, we’re off again!”

The trip two nights ago was more tense than usual because a storm was coming, with the forecast calling for forty mph winds and heavy snow. Our contact person in Alamosa said, “It’s dangerous out there by San Antonio Mountain; the wind comes through there so hard. If there’s any snow at all…” Oh yes, I knew what she meant. One of the tallest free-standing extinct volcanoes in North America at over ten thousand feet, it scares me silly even in the summer. According to my online monitoring, we’d either just get through or end up walloped, with the information changing every time I looked. They don’t necessarily plow the roads where no one lives, of course—but there’s a mechanical barrier like at railroad crossings that Colorado lowers to close the highway, and it always gives me pause. Thankfully though, we made it back this time with little damage, just the churning in my stomach from the strain of watching for snowflakes and ghost buffalo in the high beams.