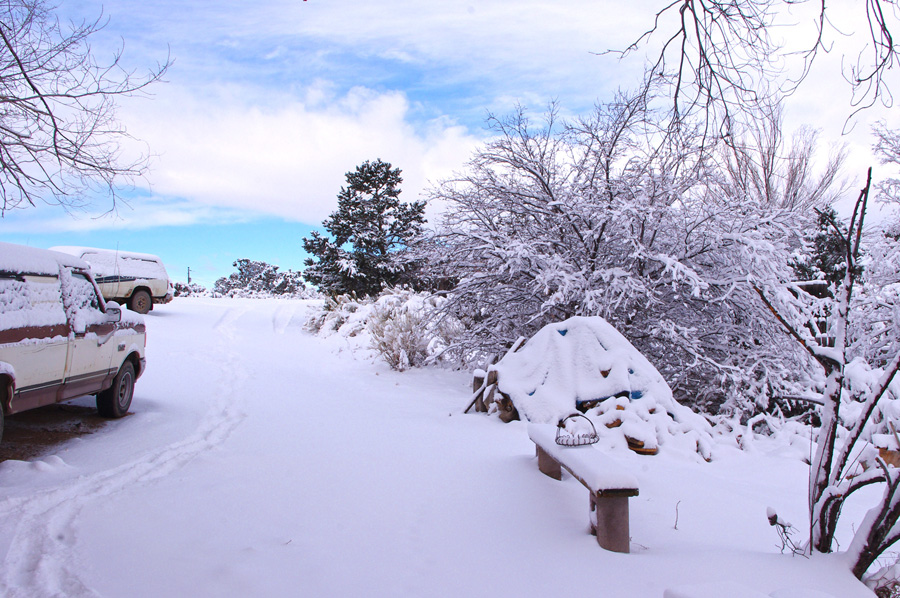 Much cold. Hard. Don’t get sick.

Looks peaceful here, eh? There was more snow than these few inches—a lot more—just 10 days ago, then came the January thaw: about half of it turned into water that became a small stream running down the hill, and then it rained… The wet stuff came with a roar in the night, as the wind at the leading edge of the storm sent garbage cans, a cat carrier, rakes, and branches crashing against the house. One very precious large ceramic pot blew over and broke because I had a little piñon “Xmas tree” stuck inside that acted as a sail. By the time I opened the door at midnight to see what the ruckus was, the stream had turned into a river! In the morning light, debris was everywhere, and walking to our car was impossible without encountering soupy mud.

A day or two of sloppy quiet followed. Then late yesterday afternoon, the northwest sky turned almost black. The wind picked up, the temperature fell off a cliff, and soon it began to snow. Before it hit, I took my sick ass outside and brought in three loads of wood, although I nearly fainted from the effort. Almost a week of cold or flu or some goddamn thing had left me with mucous-filled lungs, struggling to breathe.

For three straight nights, I’d never really slept at all. I coughed so much, my hernia scar began to ache. I had no appetite and dropped seven pounds. To save my wife, I’d taken the dead landlord’s sofa instead of the bed. Like sleeping on sacks of hardened concrete with that thing, and it didn’t work, of course. Every time I laid my head down, I was gargling green slime. Thank God I’m better now and have an appetite, but the damnable plague is in my ears. Crackle-crackle “what did you just say?” and so on. This stuff is getting old, I tell you—especially the mud. At least my mighty immune system has more antibodies in the gas tank now, so maybe next year I’ll sail through.

Today? More snow (just wait). Tonight? Back down to zero! By the weekend? High 40s and another thaw, ye gods. I’d wait to leave the house by April, say, except we’re almost out of bread.