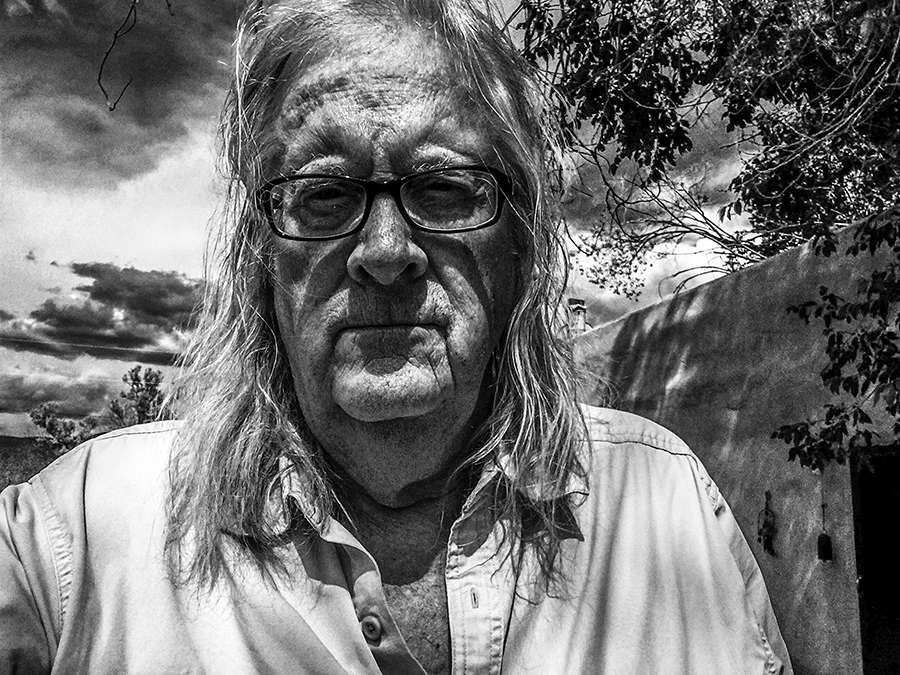 If this image had a name, it would be “After Death & Hiking.” Howdy (contact info here).

John Hamilton Farr currently lives in Taos, New Mexico, U.S.A. As New York Times best-selling author James C. Moore (Bush’s Brain) put it in a review of John’s first book, “Buffalo Lights is the work of a man attuned to the world who sees it differently than you and I and writes about it with a language and a vision of life that is impossible to ignore.”

From the introduction to Another Day in Paradise, John’s latest available now on iBooks and Amazon:

Dogs barked everywhere, though not too close. The wind hissed through the chamisa and rustled the elm tree branches. A woodpecker hammered on the dead aspen tree down by the acequia. Someone far away was playing with a chainsaw. Doves cooed out their useless mating calls. Every now and then an idiot kicked a cow. Juan allowed his eyes to open as a magpie chattered overhead, but the bird flew off and left him pure. That could have been unpleasant, he thought, sensing life and danger everywhere. Six hours later, the moon rose over the mountain. A total eclipse was already well underway, with a sizable arc of the orb in darkness. Juan stood outside and watched a long time in the strange warm air. More dogs barked than usual. As the sky grew dark, he imagined it was colder and went back in the house. Outside adobe walls, the wind picked up in bursts, unsettled, looking for something to push. The edge between the worlds was open if one knew to smell it. Unlived lives shot out from holes.

“Everything you need to know about me is right here. But yes, I was an Air Force brat. Before I graduated from high school (my third), we’d moved over 40 times, counting changes of residence in the same locations (Texas, New York, Maryland, Virginia, and Germany among them). Writing-wise, I’ve been publishing online since 1996. Before then, in some cases long before then, I was a college instructor, woods hippie, groundskeeper, metal sculptor, cartoonist, bronze caster, office manager, artist, rock & roll songwriter, web columnist, online senior news editor, and self-published author. We moved out here from the Eastern Shore of Maryland in ‘99. Almost immediately, Bill Whaley hired me to write a long-running column called ‘El Emigrante’ for his inimitable Horse Fly monthly journal, where I learned some things I still can’t talk about. There was a long stint in there as a web designer, too. Besides the 900+ blog posts on this site, you’ll find the years since then chronicled in BUFFALO LIGHTS: Maryland to New Mexico, TAOS SOUL: Love Stories, Heroes, and Wild Adventure, ANOTHER DAY IN PARADISE: Notes from Taos, and of course THE HELEN CHRONICLES: When Your Mother Falls Apart, which I heartily recommend to anyone whose parents ate their young.”

His latest digital ventures include photography NFTs for sale at OpenSea and a free newsletter at Substack.com of the same name (GODDAMN BUFFALO) featuring new and selected earlier writing and photos. As of 2020, all new JHFARR.COM posts also go to Substack. But via this, they show up in your email. (See signup form below ↓)

CONTACT INFO: Email me encrypted link), and thanks for stopping by.